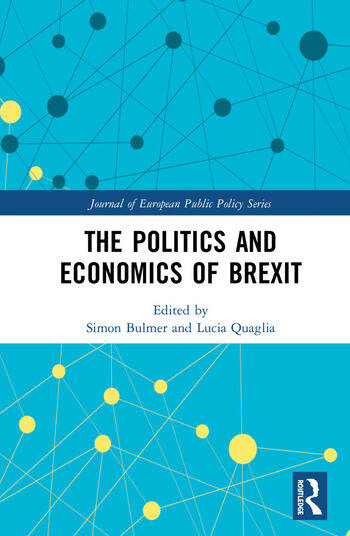 The Politics and Economics of Brexit

The British referendum on continuing membership of the European Union (EU) in June 2016 represented a turning point in the relationship between the United Kingdom (UK) and the EU. This book investigates the implications of Brexit for the EU and the UK, placing this assessment in the context of the long-term evolution of UK-EU relations. The authors relate these findings to debates within the literature on EU policy-making, comparative politics, and political economy.

The first part of this comprehensive volume explores the implications of Brexit for key policy areas, namely the single market, finance, and migration. The policies selected are those in which the consequences of Brexit are likely to be most significant because they are linked to the ‘four freedoms’ in the Single Market. The second part of the book explores important ‘horizontal’ or thematic issues, namely lessons from Brexit for theories of integration, the balance of power in the EU amongst the main member states post-Brexit, the evolution of the domestic political contestation in the EU, and the impact of Brexit on domestic politics in the UK.

This book was originally published as a special issue of the Journal of European Public Policy.

1. Introduction: The politics and economics of Brexit Simon Bulmer and Lucia Quaglia

2. Regulatory alignment and divergence after Brexit Kenneth A. Armstrong

3. Brexit and the battle for financial services David Howarth and Lucia Quaglia

4. Brexit and the perils of ‘Europeanised’ migration James Dennison and Andrew Geddes

6. Back to the future? Franco-German bilateralism in Europe’s post-Brexit union Ulrich Krotz and Joachim Schild

7. Putting Brexit into perspective: the effect of the Eurozone and migration crises and Brexit on Euroscepticism in European states Paul Taggart and Aleks Szczerbiak

8. Taking back control: the political implications of Brexit Andrew Gamble

Simon Bulmer is Professor of European Politics at the University of Sheffield, UK. His recent publications include Germany and the European Union: the reluctant hegemon? (2018, with William Paterson), and Politics in the European Union, 4th edition (2015, with Ian Bache, Stephen George, and Owen Parker).

is Professor of Political Science at the University of Bologna, Italy. Her most recent books include The Political Economy of Banking Union (2016, with D. Howarth), and The European Union and Global Financial Regulation (2014).

The Politics and Economics of Brexit