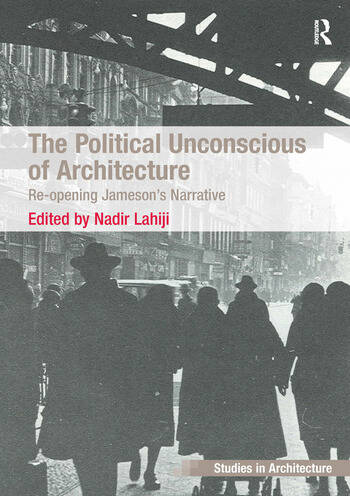 Thirty years have passed since eminent cultural and literary critic Fredric Jameson wrote his classic work, The Political Unconscious: Narrative as a Socially Symbolic Act, in which he insisted that 'there is nothing that is not social and historical - indeed, that everything is "in the last analysis" political'. Bringing together a team of leading scholars including Slavoj Zizek, Joan Ockman, Jane Rendell, and Kojin Karatani, this book critically examines the important contribution made by Jameson to the radical critique of architecture over this period, highlighting its continued importance to contemporary architecture discourse. Jameson's notion of the 'political unconscious' represents one of the most powerful notions in the link between aesthetics and politics in contemporary discourse. Taking this, along with other key concepts from Jameson, as the basis for its chapters, this anthology asks questions such as: Is architecture a place to stage 'class struggle'?, How can architecture act against the conditions that 'affirmatively' produce it? What does 'the critical', and 'the negative', mean in the discourse of architecture? and, How do we prevent architecture from participating in the reproduction of the cultural logic of late capitalism? This book breaks new ground in architectural criticism and offers insights into the interrelationships between politics, culture, space, and architecture and, in doing so, it acts as a counter-balast to the current trend in architectural research where a general aestheticization dominates the discourse.

Nadir Lahiji is an architect, critic, educator, and a theorist. He teaches architecture theory, modernity, and contemporary criticism in the intersections of philosophy, radical social theory, and psychoanalytical theory.

'In architectural discourse, Fredric Jameson is usually associated with his now-classic construction of the postmodern as a cultural dominant. That concept, however, is only part of Jameson's vast theoretical machinery, of which the political unconscious is the center, and in which architecture has the important social function to represent historical and technological forces that might otherwise remain undetectable. With luminous scope and impressive depth, this collection insists on the fuller significance of Jameson's thought for architecture. It is important for anyone interested in progressive thinking about cultural practices.' Michael Hays, Harvard University, USA 'This volume takes Fredric Jameson's writing as a lens through which to refocus the political stakes and purposes of architectural theory. Refusing neoliberalism's 'injunction against thought', the interventions help reinvigorate the emancipatory project.' Gail Day, University of Leeds, UK '... this publication collects under its covers an insightful and polemical contemporary overview of appropriations that Jameson’s notion of the political unconscious finds in architecture, photography and film studies.' Imaginations