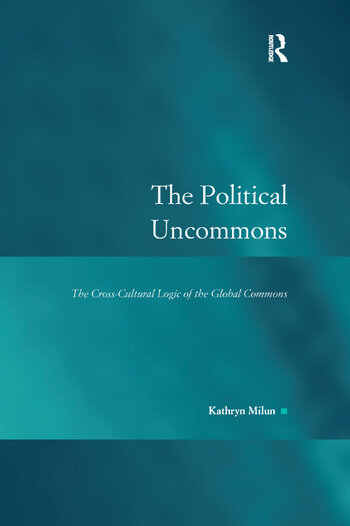 The Political Uncommons: The Cross-Cultural Logic of the Global Commons

In The Political Uncommons, Kathryn Milun presents a cultural history of the global commons: those domains, including the atmosphere, the oceans, the radio frequency spectrum, the earth's biodiversity, and its outer space, designated by international law as belonging to no single individual or nation state but rather to all humankind. From the res communis of Roman property law to early modern laws establishing the freedom of the seas, from the legal battles over the neutrality of the internet to the heritage of the earth's genetic diversity, Milun connects ancient, modern, and postmodern legal traditions of global commons. Arguing that the logic of legal institutions governing global commons is connected to the logic of colonial doctrines that dispossessed indigenous peoples of their land, she demonstrates that the failure of international law to adequately govern the earth's atmosphere and waters can be more deeply understood as a cultural logic that has successfully dispossessed humankind of basic subsistence rights. The promise of global commons, Milun shows, has always been related to subsistence rights and an earth that human communities have long imagined as 'common' existing alongside private and public domains. Utilizing specific case studies, The Political Uncommons opens a way to consider how global commons regimes might benefit from the cross-cultural logics found where indigenous peoples have gained recognition of their common tenure systems in Western courts.

Contents: Introduction; An emergent global commons: biodiversity - a case study of how culture becomes law and nature becomes empty space; Part I Res Nullius/Terra Nullius and the Epistemic Imaginary of International Law: Terra nullius, res nullius and res communis: a conceptual confusion of terms; Res nullius - the tragedy of the (modern global) commons: from Grotius and the high seas to the internet; Covering res that move: theory and practice: whales as res divini juris; The law of the seas extended vertically into the law of outer space and the law of outer space reterritorializing the Earth. Part II Two Cases of the Revocation of Terra Nullius: the Western Sahara case: genealogies captured by the census; Negotiations and the Mabo case: comparative epistemic imaginaries. Conclusion: beyond empty space - expanding the epistemological repertoire of the global commons through biofigural and technological imaginaries; Bibliography; Index.

Kathryn Milun teaches in the Anthropology/Sociology department of the University of Minnesota Duluth and has a Ph.D. in Comparative Literature and Cultural Studies. She is the author of Pathologies of Modern Space: Empty Space, Urban Anxiety and the Recovery of the Public Self (Routledge, 2007).

'Back in the exhilarating days of rampant culture theory during the 1980s when all manner of concepts applied in our everyday lives were being critically rethought, I considered Kathryn Milun's scholarship on "empty space" both exemplary and exciting. Now in our age of doing, of activist desire and effort, I meet again Milun's work, but this time as the most successfully realized case of scholarly action, following the threads of her earlier work to achieve a legally cunning and ethnographically plausible program for establishing commons in the new empty spaces amid and alongside neoliberal designs.' George E. Marcus, University of California, Irvine, USA and co-author of Designs for an Anthropology of the Contemporary

The Political Uncommons: The Cross-Cultural Logic of the Global Commons