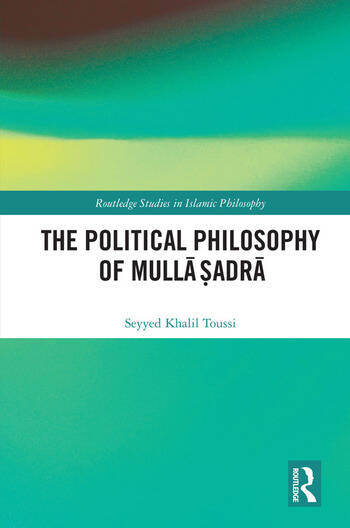 Providing a comprehensive and widely accessible investigation into Mullā Ṣadrā’s works, this book establishes his political philosophy and instigates a dialogue on the relevance of Ṣadrā’s philosophy to present day challenges.

Investigating Ṣadrā’s primary sources, the book reveals that his discourse on politics cannot be interpreted as a discursive springboard for hierocracy and political authority of jurists, nor does the mystical attitude of his philosophy (with its emphasis on the inner aspects of religion) promote an idea of quietism or a fundamental separation of religion and politics. Laying the groundwork for further translations and interpretation, this volume is not just concerned with ‘political philosophy’ as yet another particular and limited facet of Ṣadrā’s overall system. Rather, through unifying mystical, intellectual and political aspects of this singular philosopher, the volume is concerned with properly contextualizing and understanding the guiding intentions and inspirations that unify and underlie all of his creative philosophical endeavour.

Abbreviation of Journals, Encyclopaedias and Anthologies

2. The Central Importance of the Philosophy of the Human Soul in Mullā Ṣadrā’s Politics

5. A New Bision of Socio-political Justice in Transcendent Philosophy

6. Ṣadrā’s Narrative on the Virtuous City

Seyyed Khalil Toussi is an editor at Isthmus Press based in London and a Senior Research Fellow at Institute of Humanity and Cultural Studies (IHCS). He has published widely on Islamic philosophy and mysticism with a focus on transcendent philosophy and Mullā Ṣadrā.