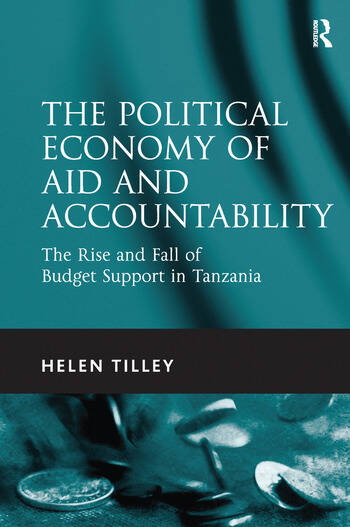 The Political Economy of Aid and Accountability: The Rise and Fall of Budget Support in Tanzania

The provision of aid is increasingly under scrutiny with increasing demands for results. This raises the question: what are our expectations from aid and are they realistic? Too often accountability is argued for without questioning if what is understood by the term is relevant or applicable. The Political Economy of Aid and Accountability: The Rise and Fall of Budget Support in Tanzania explores the real meaning of accountability and argues for a new approach to aid more relevant to recipient countries. Offering fresh, insightful ideas Helen Tilley presents a contemporary theory of accountability through a case study of the delivery of general budget support in Tanzania. By considering the wider system of often contradictory political and social relations that influence and in turn constrain donor-government relations she questions the traditional understanding of accountability and deconstructs its epistemological assumptions. Engaging in an interdisciplinary discussion drawing upon economics, sociology, political science, anthropology, psychology and philosophy the book constructs a modern and nuanced understanding of accountability and foreign aid.

Helen Tilley is a Research Fellow at ODI, London. She has extensive experience working with DFID, the World Bank, the European Commission, UNDP and governments in Africa and Asia, including two long-term advisory positions in Tanzania: with the Tanzanian government and donor agencies. She holds a PhD in Economics from the School of Oriental and African Studies, University of London.

’This pioneering book explores the often troubled relationship between donor concepts of accountability for development assistance and the way African leaders respond to their various domestic constituencies. Expertly dissecting the experience of budget support to Tanzania, Helen Tilley lifts the cloak of rhetoric and miscomprehension that obscures the place of aid in that country’s development.’ David Booth, Overseas Development Institute, UK 'Drawing on insights from economics, sociology, anthropology and political theory, this detailed case study of aid and accountability contributes significantly to the growing critique of the democratisation and good governance discourses that still underpin many aid programmes across Africa. As well as providing an original read for university teachers and students of African political economy, this book should also have an audience in aid agencies grappling with still unanswered questions of how to improve aid effectiveness.' Brian Cooksey, Tanzania Development Research Group, Tanzania 'Drawing on an in-depth study of the Tanzanian government’s "dance" with donors, Tilley explains how aid providers must avoid a purely box-ticking procedural� approach to accountability. Instead they should add a relational� component that sees the interaction between aid and domestic politics as critical to its success or failure, rather than an annoying interruption to technocratic delivery�.’ Duncan Green, Senior Strategic Adviser, Oxfam UK ’This is a carefully analyzed and well documented study of the problems associated with implementing the Paris Declaration and its tenets like General Budget Support in Tanzania, a country that more than most has been a beneficiary of the OECD cartel of donors. It shows above all how simplistic notions of procedural accountability limit understanding of how aid money flows and is distributed through dominant power relations inside the country. As a call for a new aid paradig

The Political Economy of Aid and Accountability: The Rise and Fall of Budget Support in Tanzania