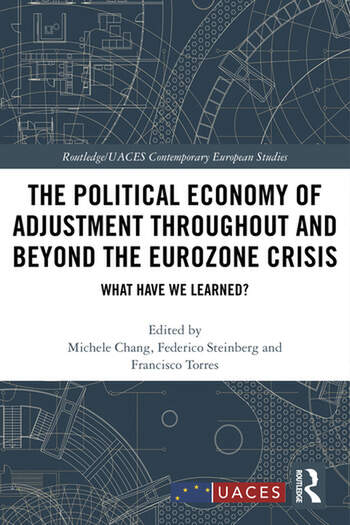 The Political Economy of Adjustment Throughout and Beyond the Eurozone Crisis: What Have We Learned?

This volume focuses on the aftermath of the euro crisis and whether the reforms have brought about lasting changes to the economic and political structures of the crisis countries or if the changes were short-term and easily abandoned post-bailout and post-recovery.

Starting with an analysis of the state of euro area governance at the onset of the crisis and the ensuing reforms, the book considers structural conditions as well as those specific to the domestic political economy of most of the countries affected by the crisis, including Greece, Ireland, Portugal, Spain, and Italy. It presents up-to-date and incisive analysis of the aftermath of the crisis and suggests how we can situate it within our understanding of different national growth models in Europe.

This book will be of key interest to scholars, students and practitioners interested in the Euro Crisis, Economic and Monetary Union, European Union and European politics and more broadly to Comparative Politics, Political Economy, International Relations, Economics, Finance, Business and Industry.

1. After the Bailout: 10 Years of the Euro Area Crisis

Part I: The European Dimension of the Crisis

2. The Euro Crisis: Its Unresolved Roots and Their Reform Implications

3. When Numbers Don’t Add Up: Bureaucratic Culture and Conflicts in EU-IMF Programs

4. Greece after the Bailouts: Assessment of a Qualified Failure

5. Ireland: Back to a Different Normal

7. Using a Sectoral Bailout to Make Wide Reforms: The Case of Spain

9. Unity and Diversity? Varieties of Capitalism and After the Euro Crisis

10. Conclusion: The Political Economy of Adjustment

Michele Chang is Professor of European Political and Governance Studies at the College of Europe.

is Senior Analyst at the Elcano Royal Institute and Lecturer of Political Economy at Madrid’s Universidad Autónoma.

is Visiting Professor of European Political Economy at Católica Lisbon School of Business and Economics and has been a Visiting Senior Fellow at the LSE since 2014 and PEFM Associate at St Antony’s College, Oxford University, since 2012.

The Political Economy of Adjustment Throughout and Beyond the Eurozone Crisis: What Have We Learned?