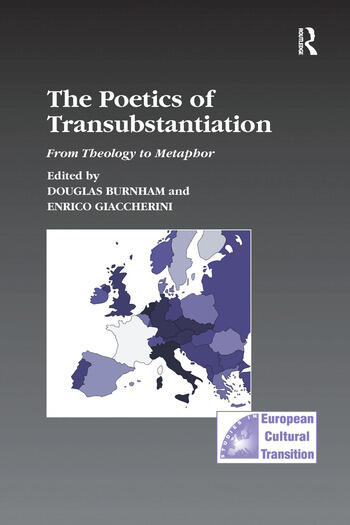 The Poetics of Transubstantiation: From Theology to Metaphor

The essays in this collection explore the concept of 'transubstantiation', its adaptations and transformations in English and European culture from the Elizabethans to the twentieth century. Favoring an interartistic and comparative perspective, a wide range of critical approaches, from the philosophical to the semiological, from cultural materialism to gender and queer studies, are brought to bear on authors ranging from Descartes, Shakespeare and Joyce, to Macpherson, Madox Ford, and Winterson, as well as on contemporary sculpture and an Italian adaptation of Conrad for the screen in an unusually comic vein. The volume, edited by Douglas Burnham of Staffordshire University and by Enrico Giaccherini of Pisa University, will be of interest to those concerned with the cultural history of Christianity and with the remarkable critical and theoretical insights generated by contemporary approaches to this traditional theme.

Douglas Burnham is Senior Lecturer in Philosophy at Staffordshire University. He is the author of An Introduction to Kant's Critique of Judgement and Kant's Philosophies of Judgement, as well as essays on Shakespeare, Thomas Mann, and Kurt Vonnegut. Enrico Giaccherini is Professor of English at Pisa University. His publications include volumes on Chaucer, the romance, and the classical tradition in Middle English narrative. He has also edited and translated Middle English texts.

'... offers a fascinating discussion of some of the Greek influences on the idea including the distinction between transubstantiation and metamorphosis and the role of the riddle in Greek tragedy... The essays on the early modern period in this volume are all of a high quality of scholarship and argument.' Sixteenth Century Journal

The Poetics of Transubstantiation: From Theology to Metaphor