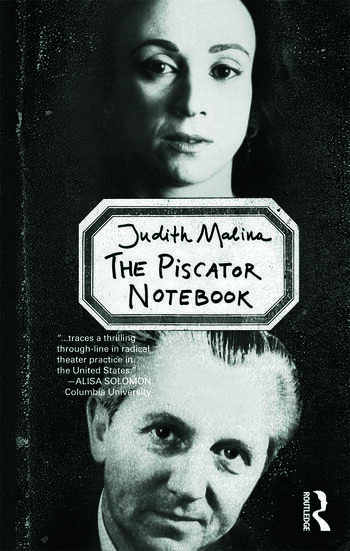 'Theater legend Malina has written one of the most interesting studies of the avant-garde theatrical movement published in the last several years.' – CHOICE

Judith Malina and The Living Theatre have been icons of political theatre for over six decades. What few realise is that she originally studied under one of the giants of twentieth century culture, Erwin Piscator, in his Dramatic Workshop at The New School in New York. Piscator founded the Workshop after emigrating to New York, having collaborated with Brecht to create "epic theatre" in Germany.

The Piscator Notebook is a compelling record of the genealogy of political theatre practice in the early 20th Century, from Europe to the US. But it is also a stunningly personal reflection on the pleasures and challenges of learning about theatre, charged with essential insights for the student and teacher, actor and director.

'Piscator is the greatest theatre man of our time.' – Bertolt Brecht

Part 1: Weimar to The Dramatic Workshop

The Founding of The Dramatic Workshop, 1940

The Teachers of Piscator’s School

My Personal Struggle to Enter The Dramatic Workshop

End of the Notebook and First Workshop Plays

By Any Other Name and Maurice Schwartz’s Yiddish Art Theatre

Piscator’s Basic Question: The Role of the Audience

Becoming a Director: A Confession

The Inspiration of Joseph Urban’s Architecture

The March of Drama

The Circle of Chalk

Tonight We Improvise – Pirandello: Breaking into the Audience

Piscator and the Audience

Piscator’s Return to Germany – and to Berlin

Piscator’s Influence: The Work of The Living Theatre