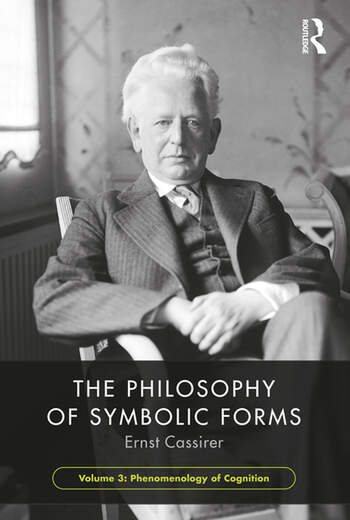 The Philosophy of Symbolic Forms, Volume 3: Phenomenology of Cognition

"In his Phenomenology of Cognition, Cassirer provides a comprehensive and systematic account of the dynamic process involved in the whole of human culture as it progresses from the world of myth and its feeling of social belonging to the highest abstractions of mathematics, logic and theoretical physics. Cassirer engages with the most sophisticated and cutting-edge work in fields ranging from ethnology to classics, egyptology and assyriology to ethology, brain science and psychology to logic, mathematics and theoretical physics. His command of philosophy, literature, and the arts is superb. Echoing his work on Kant, Cassirer begins The Philosophy of Symbolic Forms with the problem posed by the meaning of being for philosophy since Plato. But Cassirer also shows that this problem gains new significance with Kant and with the development of modern culture. Cassirer weaves his conception of the development of knowledge into a broadly Kantian and German idealist dynamic-historical conception of significance and of experience that refuses to accept a fundamental opposition between literary, philosophical and scientific culture. In consequence of his great vision grounded in careful reflection and argument, Cassirer’s systematic conception of the Copernican cosmopolitan-cosmological revolution is still philosophically and scientifically unmatched in contemporary philosophy on both sides of the Atlantic and of the Pacific." - Pierre Keller, Professor of Philosophy, University of California, Riverside, USA.

This new translation makes Cassirer’s seminal work available to a new generation of scholars. Each volume includes an introduction by Steve Lofts, a foreword by Peter Gordon, a glossary of key terms, and an index.

Steve Lofts is Professor of Philosophy at King’s University College, Canada. He is the translator of Cassirer’s The Logic of the Cultural Sciences and The Warburg Years (1919-1933): Essays on Language, Art, Myth, and Technology.

Part 1: The Expressive Function and the World of Expression

2. The Expressive Phenomenon as the Basic Element of Perceptual Consciousness

3. The Expressive Function and the Mind-Body-Problem

Part 2: The Problem of Representation [Repräsentation] and the Construction of the Intuitive World

1. The Concept and the Problem of Representation [Repräsentation]

4. The Intuition of Time

6. Toward the Pathology of Symbolic Consciousness

Part 3: The Function of Signification and the Construction of Scientific Cognition

1. Toward a Theory of the Concept

4. The Object of Mathematics

5. The Foundations of Natural Scientific Cognition

The Philosophy of Symbolic Forms, Volume 3: Phenomenology of Cognition