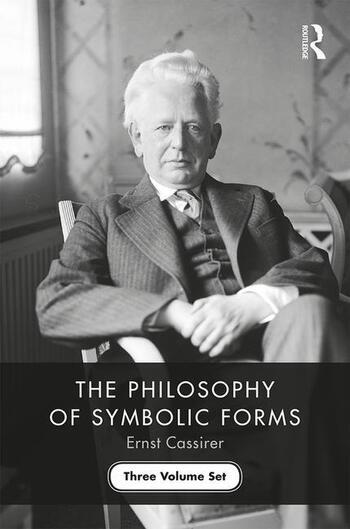 Ernst Cassirer occupies a unique space in Twentieth-century philosophy. A great liberal humanist, his multi-faceted work spans the history of philosophy, the philosophy of science, intellectual history, aesthetics, epistemology, the study of language and myth, and more. Cassirer’s thought also anticipates the renewed interest in the origins of analytic and continental philosophy in the Twentieth Century and the divergent paths taken by the 'logicist' and existential traditions, epitomised by his now legendary debate in 1929 with the philosopher Martin Heidegger, over the question "What is the Human Being?"

The Philosophy of Symbolic Forms

is Cassirer's most important work. It was first published in German in 1923, the third and final volume appearing in 1929. In it Cassirer presents a radical new philosophical worldview - at once rich, creative and controversial - of human beings as fundamentally "symbolic animals", placing signs and systems of expression between themselves and the world.

This major new translation of all three volumes, the first for over fifty years, brings Cassirer's magnum opus to a new generation of students and scholars. Taken together, the three volumes of The Philosophy of Symbolic Forms are a vital treatise on human beings as symbolic animals and a monumental expression of neo-Kantian thought.

Correcting important errors in previous English editions, this translation reflects the contributions of significant advances in Cassirer scholarship over the last twenty to thirty years. Each volume includes a new introduction and translator's notes by S. G. Lofts, a foreword by Peter Gordon, a glossary of key terms, and a thorough index.

Translator’s Introduction: The Question Concerning the Human – Life, Form, and Freedom: On the Way to an Open Cosmopolitanism

Introduction and the Framing of the Problem

1. The Problem of Language in the History of Philosophy

2. Language in the Phase of Sensible Expression

3. Language in the Phase of Intuitive Expression

4. Language as the Expression of Conceptual Thinking – The Form of the Linguistic Formation of Concept and Class

5. Language and the Expression of the Pure Forms of Relation – The Sphere of Judgment and the Concepts of Relation [Relation].

Part 1: The Expressive Function and the World of Expression

2. The Expressive Phenomenon as the Basic Element of Perceptual Consciousness

3. The Expressive Function and the Mind-Body-Problem

Part 2: The Problem of Representation [Repräsentation] and the Construction of the Intuitive World

1. The Concept and the Problem of Representation [Repräsentation]

4. The Intuition of Time

6. Toward the Pathology of Symbolic Consciousness

Part 3: The Function of Signification and the Construction of Scientific Cognition

1. Toward a Theory of the Concept

4. The Object of Mathematics

5. The Foundations of Natural Scientific Cognition