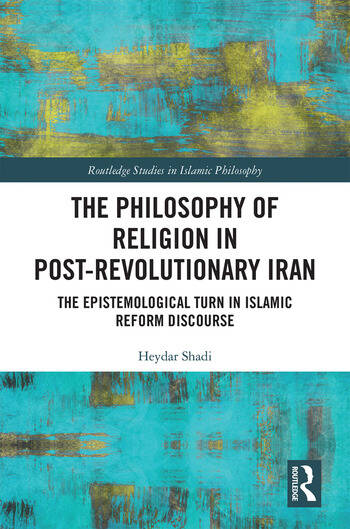 The Philosophy of Religion in Post-Revolutionary Iran: The Epistemological Turn in Islamic Reform Discourse

This book explores the intellectual discourse in post-revolutionary Iran. It focuses on Abdolkarim Soroush, a leading Muslim liberal thinker, whose theory of religion is regarded as highly relevant to the current theological and intellectual dynamics in the Islamic world.

The Philosophy of Religion in Post-Revolutionary Iran discusses why and how Soroush's thought has developed from an Islamic apologetic modernist theology in the 1970s to a liberal theory about religion in post-revolutionary Iran. Through a close and detailed analysis of Soroush's main theories, the book argues that Soroush's thought evolved, through reception of post-positivist epistemology and interaction with Islamism in practice, into a historicist and pluralist theory of religion, a theory that regards religion, including Islam, as being a contextual and historical dialogue between man and the Absolute. The book also highlights some shortcomings of Soroush’s reform project. Specifically, it notes that Soroush, consciously or unconsciously, has not yet admitted many extensive consequences of his theories, such as those relating to historicity of religious rituals (‘ibadat) or recognition of the post-Mohammadan revelations and religions. In addition, some other features and implications of Soroush’s thought, such as a historical-critical approach to the Koran, post-secular and post-Islamist theologies, and his dialogical approach that goes beyond the Orientalism–Occidentalism dichotomy, are discussed.

Providing a detailed overview on this leading Muslim thinker, this book will appeal to students and scholars of Islamic Philosophy, Middle East Studies, and Philosophy of Religion.

Chapter 1 From Critique of Marxism to Critique of Islamism: Soroush's Biography and Intellectual Context

Chapter 3 Religion as a Historical and Plural Dialogue Between Humans and God: Soroush's Theory of Religion

Chapter 6 From Apology to a new Theory

The Philosophy of Religion in Post-Revolutionary Iran: The Epistemological Turn in Islamic Reform Discourse