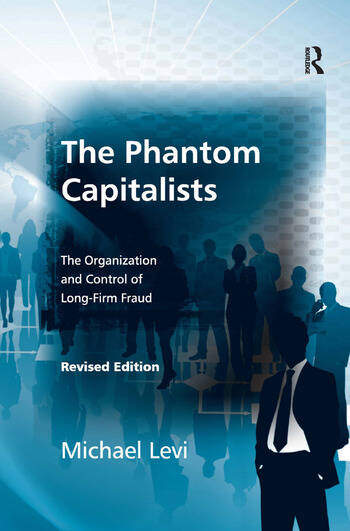 The Phantom Capitalists: The Organization and Control of Long-Firm Fraud

This book analyzes in detail how and why people become involved in long-firm (planned bankruptcy) fraud, the similarities and differences between long-firm fraud and other crimes, the links between bankruptcy fraudsters and other professional and organized criminals, the techniques that fraudsters use, and the social and commercial relationships that exist within the operational world of the long-firm fraudster. Extensively researched, the study uses interviews with and documentation from businesspeople, credit controllers, lawyers, judges, police, fraud investigators as well as fraudsters themselves. It also makes use of extensive documentary material from contemporary and historical police and court records. Originally published in the 1980s, the revised edition of this seminal work provides a substantial new introduction written by the author to highlight the changing and unchanging relevance of the findings for a contemporary audience, and the ways in which fraud opportunities and the organization of frauds have modified in the intervening years.

Dr. Michael Levi has degrees from Oxford, Cambridge, Southampton and Cardiff universities and has been Professor of Criminology at Cardiff University since 1991. He has been conducting international research on the control of white-collar and organised crime, corruption and money laundering since 1972, and has published widely on these subjects as well as editing major journals, including Criminology and Criminal Justice, the official journal of the British Society of Criminology. His academic standing was acknowledged by the award of a D.Sc. (Econ.) from Cardiff University (2007) and election to a Fellowship of the Association for Learned Societies in Social Sciences (2006). In 2007, he was awarded a 3-year Professorial Fellowship by the UK Economic and Social Research Council to develop research on transnational economic and organised crime and on responses to it. Recent public roles include membership of the UK Cabinet Office PIU steering group on proceeds of crime; European Commission sub-group on money-laundering; Scientific Expert on Organised Crime to the Council of Europe; and Parliamentary Specialist Adviser to a review of policing and anti-social behaviour in Wales. Since 2005, he has examined fraud sentencing for the UK Government Fraud Review and has conducted reviews of (a) economic crime in Europe for the Council of Europe, (b) money-laundering typologies for the ASEM countries, (c) the nature, extent and cost of fraud in the UK for the Home Office and the Association of Chief Police Officers, and (d) enhanced proceeds of crime recovery possibilities for the PM's Strategy Unit. Other recent projects include Evaluating the effectiveness of the Dedicated Cheque and Plastic Crime Unit (Home Office), Measuring and Reducing Crime - a project to integrate organised crime risk analysis into EC policy-making (EC), Improving Knowledge on Organised Crime (EC), Controlling the international money trail (ESRC), Analysis of British Crime Survey data on fraud and hi-tech crime (Home Office), and a Literature review of upper-level drugs trafficking (Home Office) Recent publications include: 2007

'This book was one of a handful in its era (Peter Reuter's Disorganized Crime is the other that comes immediately to mind) that changed the way investigators of crime and its discontents looked at the world and at their subject. It remains vital today, particularly with the additional material which situates it neatly in a more current context. Dealing with what back when it was written seemed at first glance an investigation of a minor (except to victims) and rather colourless crime, namely fraudulent bankruptcy, in reality this book challenged the usual logic applied to investigations of economically motivated crimes, and set a new standard in what - with only a hint of irony - might be called evidence-based (as distinct from random anecdotally based) crime studies.' Thomas Naylor, McGill University, Canada 'This is one of the few books to focus on what fraudsters say and think themselves. This understanding of professional fraudsters "from inside" not only provides a fascinating insight into their lives, it also sheds a penetrating light on the historical background and contemporary surrounding landscape.' Petrus C. van Duyne, Universiteit van Tilburg, The Nedtherlands 'A second edition after more than 20 years is a rare exception in our field. Michael Levi's The Phantom Capitalists is as fresh as it was in 1981. His naturalistic approach and virtuoso account of the world of fraudsters is cutting-edge today - an anticipatory tale of globalisation and crime, without even using the term. Susanne Karstedt, Keele University, UK '...[this books] re-issue is welcome amidst the contemporary torrent of criminological publishing - for the very fact of it being available to a new audience, as well as for it to be re-read in the light of what we think we know about how the world has changed since its first appearance...a classic British criminological text.' British Journal of Criminology 'Despite the now all too obvious relevance for our times and for the continuin

The Phantom Capitalists: The Organization and Control of Long-Firm Fraud