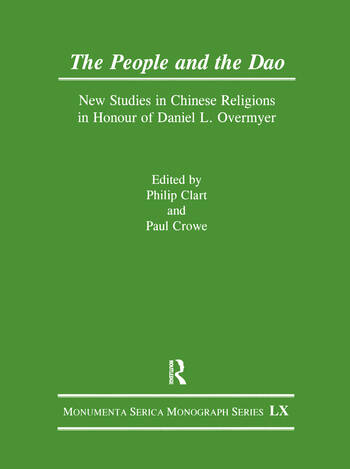 The People and the Dao: New Studies in Chinese Religions in Honour of Daniel L. Overmyer

The papers in this volume go back to a conference held September 14-15, 2002, at the University of British Columbia in Vancouver, B.C., in honour of Prof. Daniel L. Overmyer on his retirement. The contributions pay tribute to this renowned scholar of Chinese religious traditions, whose work is a constant reminder to look beyond text to context, beyond idea to practice, to study religion as it was and is lived by real people rather than as an abstract system of ideas and doctrines.

I. Popular Sects and Religious Movements

HUBERT SEIWERT: The Transformation of Popular Religious Movements of the Ming and Qing Dynasties: A Rational Choice Interpretation

SHIN-YI CHAO: The Precious Volume of Bodhisattva Zhenwu Attaining the Way. A Case Study of the Worship of Zhenwu (Perfected Warrior) in Ming-Qing Sectarian Groups

CHRISTIAN JOCHIM: Popular Lay Sects and Confucianism: A Study Based on the Way of Unity in Postwar Taiwan

PHILIP CLART: Merit beyond Measure. Notes on the Moral (and Real) Economy of Religious Publishing in Taiwan

JEAN DEBERNARDI: "Ascend to Heaven and Stand on a Cloud." Daoist Teaching and Practice at Penang’s Taishang Laojun Temple.

JOHN LAGERWEY: The History and Sociology of Religion in Changting County, Fujian

KENNETH DEAN: The Growth of Local Control over Cultural and Environmental Resources in Ming and Qing Coastal Fujian

PAUL R. KATZ: Religion, Recruiting and Resistance in Colonial Taiwan: A Case Study of the Xilai An Incident, 1915

WANG CHIEN-CH’UAN. Transl. PHILIP CLART: The White Dragon Hermitage and the Spread of the Eight Generals Procession Troupe in Taiwan

JORDAN PAPER: The Role of Possession Trance in Chinese Culture and Religion: A Comparative Overview from the Neolithic to the Present.

III. The Religious Life of Clerics, Literati, and Emperors

JUDITH BOLTZ: On the Legacy of Zigu and a Manual on Spirit-writing in Her Name

The People and the Dao: New Studies in Chinese Religions in Honour of Daniel L. Overmyer