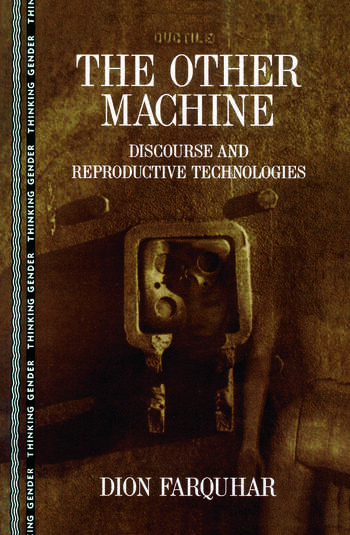 The Other Machine: Discourse and Reproductive Technologies

With technological advances in reproduction no longer confined to the laboratory or involving only the isolated individual, women and men are increasingly resorting to a variety of technologies unheard of a few decades ago to assist them in becoming parents. The public at large, and feminists as a group, are confused and divided over how to view these technologies and over what positions to take on the moral and legal dilemmas they give rise to.

Farquhar argues that two perspectives have tended to dominate feminist discussions of these issues. She labels these: "fundamental feminism" and "market liberalism." By linking a theoterical approach with a practical set of issues, Farquhar's The Other Machine provides a rigorous analysis of contemporary feminist debates.

"Farquhar's text is intellectually rigorous and provocative..." -- Majia Holmer NadesanPhilosophy in Review
"This brilliant and visionary study steers a course between, on the one hand, the conventional Sunday supplement celebrations of reproductive technologies' miracles of modern medicine' and, on the other, the demonology of much of feminist critique whereby power and profit-hungry (male) doctors foist useless or dangerous procedures on gullible, desperate (female) patients. Farquhar argues compellingly that both discourses, mired in conventional notions of reproduction, are blind to the revolutionary potential of these technologies to transform radically our ideas of maternity, parenthood, family, and kinship
." -- Sandra Lee Bartky, University of Illinois at Chicago
"Dion Farquhar has produced a dynamic and provocative analysis of the incredible complexity of issues, values and emotions involved in understanding and assessing assisted reproductive technologies (ARTs). Avoiding the more common course of either accepting these technologies with open arms as a means of granting childless couples a baby or rejecting them as tampering with nature, this book instead explores the ways in which these technologies open up and challenge our understanding of sexuality, reproduction, parenting and kinship. It explores with great sublety and sensitivity the liminal space between biology and science, nature and culture, and freedom and restraint." -- Elizabeth Grosz, Monash University

The Other Machine: Discourse and Reproductive Technologies