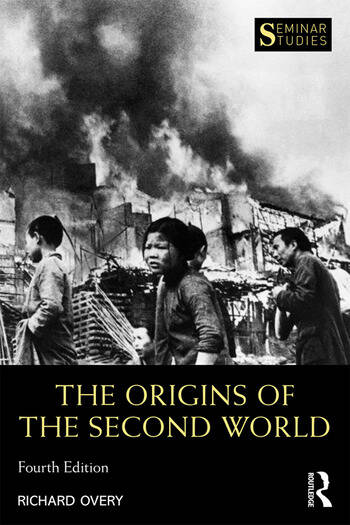 Exploring the reasons why the Second World War broke out in September 1939 and why a European conflict developed into a war that spanned the globe, The Origins of the Second World War argues that this was not just ‘Hitler’s War’ but one that had its roots and origins in the decline of the old empires of Britain and France and the rise of ambitious new powers in Germany, Italy and Japan who wanted large empires of their own.

This fourth edition has been revised throughout, covering the origins of the war from its background in the First World War to its expansion to embrace the Soviet Union, Japan and the United States by the end of 1941. Creating a comprehensive and analytical narrative while remaining a succinct overview of the subject, this book takes a thematic approach to the complex range of events that culminated in global warfare, discussing factors such as economic rivalry, rearmament and domestic politics and emphasising that any explanation of the outbreak of hostilities must be global in scope.

Containing updated references and primary source documents alongside a glossary, a chronology of key events and a Who’s Who of important figures, this book is an invaluable introduction for any student of this fascinating period.

The collapse of the League

America and the Soviet Union

From the Rhineland to Munich

The failure of ‘economic appeasement’

The aftermath of Munich

The outbreak of war

6 FROM EUROPEAN TO WORLD WAR

The war in the west

The coming of world war

1 The Treaty of Versailles and Germany

2 The Covenant of the League

3 The search for a settlement

7 Preparation for war before Munich

13 Britain and Germany in the Balkans

16 The crisis in France

18 The change of mood in the west

23 Stalin warns the west after Munich

24 The Franco-British failure in Moscow

25 The Soviet reaction to German advances, 1939

29 The last gasp of appeasement

31 Poland in the middle

32 The last days of peace

35 A Demand for Peace

37 Preparation for total mobilization in Germany

39 The German attack on Russia

40 Russia raises the price for co-operation

Richard Overy is Professor of History at the University of Exeter. He has authored and edited more than 30 books on the European dictators, the Second World War and the history of air power, including The Air War 1939-1945 (2006, second edition), Why the Allies Won (2006, second edition), The Dictators: Hitler's Germany and Stalin's Russia (2004), which won both the Wolfson and the Hessell Tiltman Prizes for History in 2005, and 1939: Countdown to War (2009). His book The Bombing War: Europe 1939-1945 (2013) won a Cundill Award for historical literature.

"This remains the stand-out single volume account of the origins of the war, presented here with important ‘fourth edition’ updates. Overy summarizes and surveys a vast literature with consummate perspicacity, to the benefit of readers from all backgrounds."

"The fourth edition of this classic text, carefully revised and refreshed, is extremely welcome. Overy guides readers masterfully through the complex historical and historiographical terrain of the road to war, offering a clear but sophisticated interpretation."

"The latest edition of Richard Overy's classic text constitutes an invaluable guide for teachers and students - as well as for anyone else interested in understanding how the Second World War came about. Precise, accessible and engaging throughout, the book highlights Overy's powerful command of the subject."