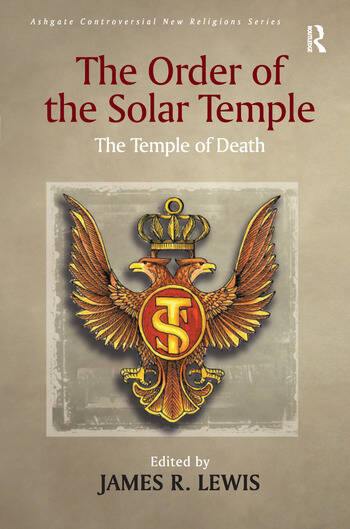 The Order of the Solar Temple: The Temple of Death

James R. Lewis is Lecturer in Religious Studies at the University of Wisconsin, USA. He is a highly-published scholar of New Religions. He is the editor of The Oxford Handbook of New Religious Movements (2004), and also Controversial New Religions (co-edited with Jesper A. Petersen). In addition to writing a dozen other anthologies on new religions, James Lewis is the author of a textbook and a major encyclopedia in this field of study. His monographs include Legitimating New Religions (2003). He is a professional reference book author; his encyclopedias have won American Library Association, New York Public Library Association, and Choice book awards.

’This book is useful not only for giving the reader a multi-faceted view of this ’enigma’, but it provides any researcher reading it with an extremely useful typology of neo-Templarism as a movement. It not only explains the possible reasons for the turn towards death on behalf of the leaders of the OST, but it illuminates the past and present of a wider movement of which we have certainly not heard the end.’ Alternative Spirituality and Religion Review ’This volume is useful to scholars of NRMs and to members of the public who are interested in non-partisan, sensible and accessible treatments of controversial subjects within the study of religion.’ Bulletin for the British Association for the Study of Religions

The Order of the Solar Temple: The Temple of Death