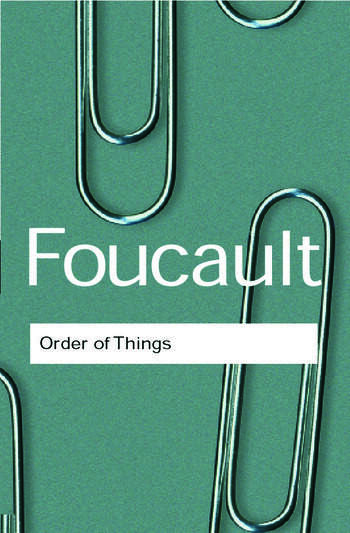 The Order of Things

When one defines "order" as a sorting of priorities, it becomes beautifully clear as to what Foucault is doing here. With virtuoso showmanship, he weaves an intensely complex history of thought. He dips into literature, art, economics and even biology in The Order of Things, possibly one of the most significant, yet most overlooked, works of the twentieth century. Eclipsed by his later work on power and discourse, nonetheless it was The Order of Things that established Foucault's reputation as an intellectual giant. Pirouetting around the outer edge of language, Foucault unsettles the surface of literary writing. In describing the limitations of our usual taxonomies, he opens the door onto a whole new system of thought, one ripe with what he calls "exotic charm". Intellectual pyrotechnics from the master of critical thinking, this book is crucial reading for those who wish to gain insight into that odd beast called Postmodernism, and a must for any fan of Foucault.


Publishers Note, Forward to the English Edition, Preface
Part I:
1.Las Meninas
2.The Prose of the World: I The Four Similitudes, II Signatures, III The Limits of the World, IV the Writing of Things, V The Being of Language
3.Representing: I Don Quixote, II Order, III The Representation of the Sign, IV Duplicated Representation, V The Imagination of Resemblance, VI Mathesis and 'Taxinoma'
4. Speaking: I Criticism and Commentary, II General Grammar, III The Theory of the Verb, IV Articulation, V Designation, VI Derivation, VII The Quadrilateral Language
5. Classifying: I What the Historians say, II Natural History, III Structure, IV Character, V Continuity and Catastrophe, VI Monsters and Fossils, VII The Discourse of Nature
6. Exchanging: I The Analysis of wealth, II Money and Prices, III Mercantilism, IV The Pledge and the Price, V The Creation of Value, VI Utility, VII General Table, VIII Desire and Representation
Part 2
7. The Limits of Representation: I The Age of History, II The Measure of Labour, III The Organic Structure of Beings, IV Word Inflection, V Ideology and Criticism, VI Objective Synthesis
8. Labour, life, Language: I The New Empiricities, II Ricardo, III Cuvier, IV Bopp, V Language Became Object
9. Man and His Doubles: I The return of Language, II The Place of the King, III The Analytic of Finitude, IV The Empirical and the Transcendental, V The 'Cogito' and the Unthought, VI The Retreat and the Return of the Origin, VII Discourse and Man's Being, VIII The Anthropological Sleep
10. The Human Sciences: I The Three Faces of Knowledge, II The Form of the Human Sciences, III The Three Models, IV History, V Psychoanalysis and Ethnology, VI In Conclusion

'The work numbers among those outward signs of culture the trained eye should find on prominent display in every private library. Have you read it? One's social and intellectual standing depends on the response.' - Michel de Certeau

The Order of Things