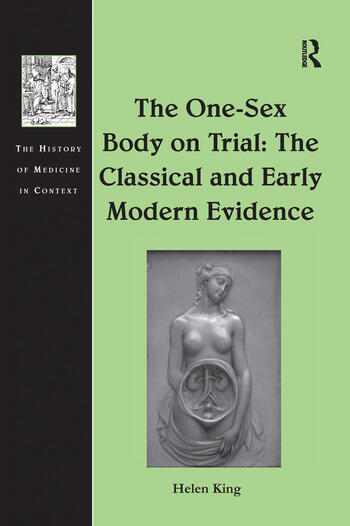 The One-Sex Body on Trial: The Classical and Early Modern Evidence

By far the most influential work on the history of the body, across a wide range of academic disciplines, remains that of Thomas Laqueur. This book puts on trial the one-sex/two-sex model of Laqueur's Making Sex: Body and Gender from the Greeks to Freud through a detailed exploration of the ways in which two classical stories of sexual difference were told, retold and remade from the mid-sixteenth to the nineteenth century. Agnodike, the 'first midwife' who disguises herself as a man and then exposes herself to her potential patients, and Phaethousa, who grows a beard after her husband leaves her, are stories from the ancient world that resonated in the early modern period in particular. Tracing the reception of these tales shows how they provided continuity despite considerable change in medicine, being the common property of those on different sides of professional disputes about women's roles in both medicine and midwifery. The study reveals how different genres used these stories, changing their characters and plots, but always invoking the authority of the classics in discussions of sexual identity. The study raises important questions about the nature of medical knowledge, the relationship between texts and observation, and the understanding of sexual difference in the early modern world beyond the one-sex model.

Helen King is Professor of Classical Studies at The Open University, UK.

'Elegantly argued and endlessly fascinating, King has marshalled an impressive range of material to show that the two-sex body is not a modern phenomenon. Two-sex and one-sex ways of thinking about the body have existed alongside one another since antiquity, and the choice about which model to privilege depended on the rhetorical needs of individual authors.' Bryn Mawr Classical Review 'In The One-Sex Body on Trial, Helen King... at last provides the counterpoint. Gracefully acknowledging the value of Laqueur’s work, she also offers its first real challenge. With her usual depth of perception, careful research, and immanent readability, King elaborates the other side of the one-sex/two-sex story.' Medical Humanities 'King's monograph is much more than a withering critique of Laqueur's Making Sex, it is a masterful review of the medical history of women's bodies and the politics of sex in medicine... King exercises a detailed, cautious reading of texts in their historical context... All the while, King thoughtfully and thoroughly draws in the historiography of women in medicine and midwifery/obstetrics, as well as a critical analysis of representations of women in anatomy and physiology that has blossomed in the past fifty years of feminist perspectives in the history of medicine and in science studies.' Studies in History and Philosophy of Biological and Biomedical Sciences ’King’s book rigorously interrogates the ’one-sex’ and two-sex’ models until there is no doubt that they are simply wrong. She also replaces Laqueur’s reductive models with fascinating insights detailing the complex understanding of the reproductive system and gender identity in the classical and early modern periods. The One-Sex Body on Trial is an essential text, which ends a dubious chapter in academic history.’ Parergon ’King’s eloquent and detailed investigation creates a convincing argument that versions of both the one-sex and two-sex models exist in the classical

The One-Sex Body on Trial: The Classical and Early Modern Evidence