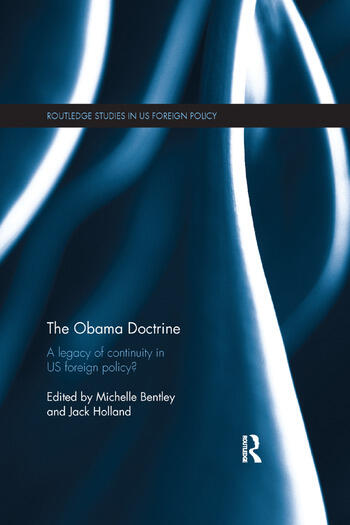 The Obama Doctrine: A Legacy of Continuity in US Foreign Policy?

President Obama’s first term in office was subject to intense criticism; not only did many feel that he had failed to live up to his leadership potential, but that he had actually continued the foreign policy framework of the George W. Bush era he was supposed to have abandoned. This edited volume examines whether these issues of continuity have been equally as prevalent during the president’s second term as his first.

Is Obama still acting within the foreign policy shadow of Bush, or has he been able to establish his own approach towards international affairs, distinct from his predecessor? Within this context, the volume also addresses the idea of legacy and whether Obama has succeeded in establishing his own distinct foreign policy doctrine. In addressing these questions, the chapters explore continuity and change from a range of perspectives in International Relations and Foreign Policy Analysis, which are broadly representative of a spectrum of theoretical positions.

2 Restraint and constraint: A cautious president in a time of limits

Section 2: The language and culture of the War on Terror

4 Ending the Unendable: The rhetorical legacy of the War on Terror

5 War on Terror II: Obama and the adaptive evolution of US counterterrorism

6 Shifting binaries: The colonial legacy of Obama’s War on Terror

8 Plus ça change? Reflecting on Obama’s nuclear agenda and legacy

12 The US and China: Obama’s cautious engagement

13 Energy security under Obama: Some hope, but not much change

Section 4: The Obama Doctrine: Its place in history

Jack Holland is Associate Professor in International Security at the University of Leeds, UK

The Obama Doctrine: A Legacy of Continuity in US Foreign Policy?