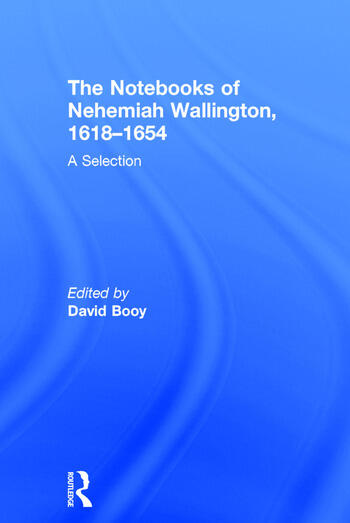 The Notebooks of Nehemiah Wallington, 1618–1654: A Selection

Writings by early-modern English artisans are rare and thus precious. London wood-turner and puritan, Nehemiah Wallington (1598-1658) is exceptional for having compiled fifty notebooks between 1618 and 1654. Although only seven of these are extant, they not only provide a wealth of valuable information about life in seventeenth-century London, but more importantly give access to the author's personal world, both inner and outer. Providing substantial excerpts from the surviving notebooks, this edition covers the broad range of subjects that animated Wallington's everyday life. Accounts of incidents in his domestic, working and religious life sit side by side with sustained meditations on his spiritual state; reports on national events are given, along with their possible providential meanings. Particularly illuminating are Wallington's reflections on his own mental wellbeing, at times suicidal, at others ecstatic. From letters on religious matters to expressions of anxiety over the illnesses and mishaps of his wife and children, from vexed thoughts about money matters to chronicling the tumults of civil war London, this collection provides a window into everyday life in seventeenth-century England. By making the writings of Nehemiah Wallington available in a modern edited edition, fully footnoted and referenced, together with a substantial scholarly introduction, we hope that this little-known London wood-turner will soon take his deserved place besides Pepys and Evelyn as one of the authentic voices commenting on early modern England.

Dr David Booy was from the Department of English at Anglia Ruskin University, UK

'David Booy has made an admirable selection from the notebooks, sympathetic to Wallington's own priorities and preoccupations, which he has scrupulously edited, retaining Wallington's erratic orthography, adding necessary punctuation, identifying the sources of Biblical quotations, the authors and titles of tracts and pamphlets from which Wallington copied excerpts, and the identities of the people he alludes to in the texts. Generations of readers will turn to this edition with gratitude'. Paul Seaver, Stanford University,USA 'Nehemiah Wallington's prolific writings show us, in graphic and immediate detail, the dangerously exciting world of 17th century London seen through the eyes of a puritan artisan. This ambitious and excellent edition enables us to share, for the first time, his hopes, joys, disappointments and fears as he pursues a turbulent spiritual quest through civil war and revolution. Wallington's letters, diaries and meditations throw a flood of light on a personal and family history that he always placed firmly within a national, international and indeed cosmic drama. ' Bernard Capp, University of Warwick, UK ’The book deserves to be read by anyone interested in public life during the civil wars and inter-regnum, rather than merely those fascinated by puritan piety and godly introspection.’ Parliamentary History ’Nehemiah Wallington leaps from the pages of this evocative and informative book ... David Booy is to be congratulated on a valuable scholarly edition.’ Journal of Theological Studies ’For students ... [this volume] ... will be invaluable, a reliable source for spiritual and everyday life in mid-seventeenth-century London, packed with starting points for research projects. ... Booy brings together all of the extant manuscripts for the first time, and it is invaluable to be able to read so extensively (and conveniently) from all of Wallington’s writings in one sitting. The selection thereby offers a significant commentary on dai

The Notebooks of Nehemiah Wallington, 1618–1654: A Selection