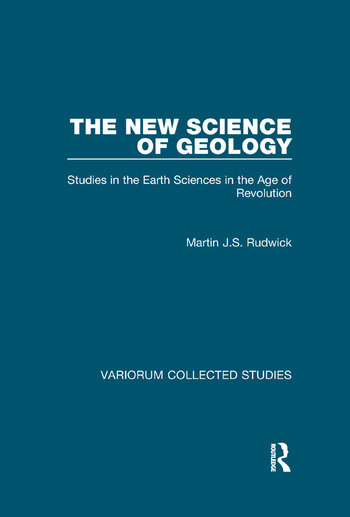 The New Science of Geology: Studies in the Earth Sciences in the Age of Revolution

The science of geology was constructed in the decades around 1800 from earlier practices that had been significantly different in their cognitive goals. In the studies collected here Martin Rudwick traces how it came to be recognised as a new kind of natural science, because it was constituted around the idea that the natural world had its own history. The earth had to be understood not only in relation to unchanging natural laws that could be observed in action in the present, but also in terms of a pre-human past that could be reliably known, even if not directly observable and its traces only fragmentarily preserved. In contrast to this radically novel sense of nature's own contingent history, the earth's unimaginably vast timescale was already taken for granted by many naturalists (though not yet by the wider public), and the concurrent development of biblical scholarship precluded any significant sense of conflict with religious tradition. A companion volume, Lyell and Darwin, Geologists: Studies in the Earth Sciences in the Age of Reform, was published in 2005.

Contents: Introduction; Bibliography; Earth-History and the History of Geology: Geologists' time: a brief history; The shape and meaning of earth history; Minerals, strata and fossils; The emergence of a new science; The emergence of a visual language for geological science, 1760-1840. Cuvier and Earth-History: Jean-André de Luc and nature's chronology; Cuvier and Brongniart, William Smith, and the reconstruction of geohistory; Researches on fossil bones: Georges Cuvier and the collecting of international allies; Georges Cuvier's paper museum of fossil bones. Geology in the Age of Lyell: Encounters with Adam, or at least the hyaenas; 19th-century visual representations of the deep past; A year in the life of Adam Sedgwick and company, geologists; Travel, travel, travel: geological fieldwork in the 1830s; The group construction of scientific knowledge: gentlemen-specialists and the Devonian controversy; The glacial theory; Index.

'The breadth of Rudwick's historical research is considerable... there is something here for everybody.' Geological Magazine 'It is of course impossible to do justice to the great variety of topics dealt with in this book. It is an excellent idea to republish these papers, which makes them easy to consult and compare. It is always stimulating to read Rudwick's well documented articles...' Archives of Natural History 'The articles in this book, which most of us have probably read in a scattered way, help us to refocus our appreciation of a most influential historian of science.' Earth Sciences History

The New Science of Geology: Studies in the Earth Sciences in the Age of Revolution