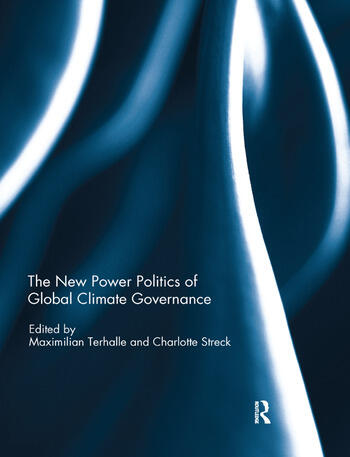 This book is based on the assumption that great powers determine global politics and, in this instance, environmental politics. It addresses the approaches of both established and rising powers and their implications for the advancement of international climate negotiations. The new introduction looks at the key developments in this realm since 2013, examining the bilateral deals between China and the United States and the results of the UNFCCC’s 21st Convention of the Parties (COP) convening at Paris in 2015.

Two key features link the contributions of this volume: their underlying assumption that major powers are the central actors in determining global environmental politics; and their assessment of, and implications of, the approaches both of rising and established major powers for global climate norms. One key argument of this volume is that today’s geopolitics are about who gets how much in the fiercely competitive race over the available ‘carbon space’. The book concludes that prudently balancing power in the new century requires a fair sharing of burden among the existing and emerging powers. In light of such burden-sharing, pluralistic domestic politics as well as diverging normative beliefs and worldviews require consideration of different conditions, even if historical legacies of the industrialised world have increasingly been put into question as a political argument by the United States.

This book is based on a special issue of the journal Climate Policy.

1. Facilitating global climate governance: the role of major powers before the COP 2015 at Paris Maximilian Terhalle

8. The UNFCCC as a negotiation forum: towards common but more differentiated responsibilities Jutta Brunnée and Charlotte Streck

Maximilian Terhalle is Reader in International Politics at Winchester University, UK, and Senior Visiting Fellow at the London School of Economics (LSE).

is Director of Climate Focus, an international advisory company on climate policy. Before founding Climate Focus in 2004, Charlotte served for five years as Senior Counsel with The World Bank in Washington, DC. She serves as a climate change and environmental advisor to numerous governments, private companies, foundations, and non-for-profit organizations.