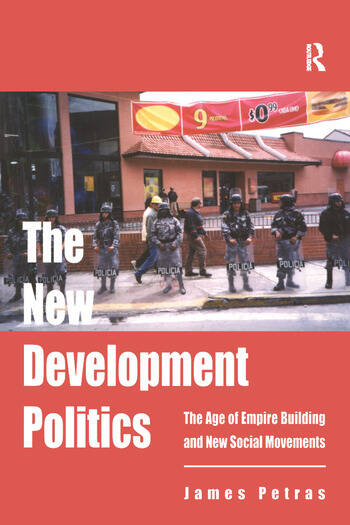 The New Development Politics: The Age of Empire Building and New Social Movements

A critique of current conceptions of international political economy, the role of the state and contemporary social movements, The New Development Politics challenges the dominant paradigms in the field of development studies. Raising fundamental theoretical and empirical questions, it provides a coherent response to the increasing militarization of inter-state relations, increasing protectionism and inter-state rivalries and the growing age of state intervention in political, economic and social life. The study presents a critical analysis of US empire-building, the role of dirty money and political power, as opposed to technological change. It features a discussion of neo-mercantilism as a new mode of empire and examines the role of new movements of unemployed and landless peasants in key Third World countries.

Contents: Imperialism and empire-building in the 21st century; The US offensive in Latin America: Golpes, retreat and radicalization; Dirty money: the foundation of US growth and empire; The centrality of the state; The myth of the third scientific-technological revolution; Neo-mercantilist empire in Latin-America: Bush, ALCA, and Plan Colombia; Peasant-based socio-political movements in Latin America (with Henry Veltmeyer); Brazil's rural landless workers' movement: ten hypotheses on successful leadership (with Henry Veltmeyer); The unemployed workers' movement in Argentina; Non-governmental organizations in a conjuncture of conflict and war psychosis; On revolutionary politics; Bibliography; Index.

'James Petras addresses problems of far-reaching human significance.Â  His essays cover a very wide range of topics, among them significant aspects of the economic life of the rich societies that are commonly overlooked; critical analysis of theoretical work and the general role of intellectuals; and close description of ongoing popular struggles, based on his direct experience and intimate knowledge.Â  Particularly valuable, and rare, are his insights into the role of the peasantry in the emerging world system -- and furthermore, into how organization and activism of peasant movements interacts with other popular forces that are of great importance and should be much better known and understood.'Â  Noam Chomsky, Institute Professor; Professor of Linguistics, Linguistic Theory, Syntax, Semantics, Philosophy of Language, MIT Linguistics 'No scholar today has the grasp that Petras has of the complexities and nuances of the 'new development politics'. The book is a tour de force, a theoretically and politically sharp analysis of the new and emerging political landscape in the world today. A must read.' Dr Henry Veltmeyer, Saint Mary's University, Canada 'Petras'...writing has an ideological fervour and an academic rigour that make the book an engaging read.' Development Policy Review 'Anyone who teaches theory or works in the field of international development will be interested in reading this volume alongside other studies on the globalization of neoliberal economy.' Etudes internationales 'The issues raised in this book are undoubtedly important for the future of Latin America.' Latin American Studies 'It contains a breadth of thought and experience, and provides someuseful case-studies and empirical insights.' Millennium

The New Development Politics: The Age of Empire Building and New Social Movements