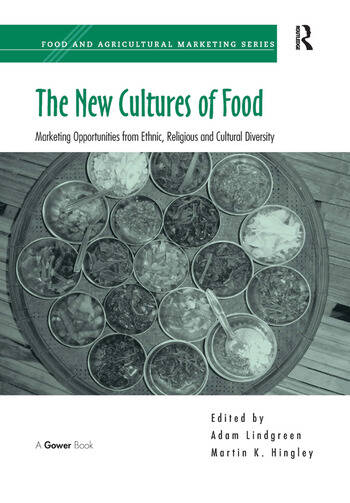 The New Cultures of Food: Marketing Opportunities from Ethnic, Religious and Cultural Diversity

Food is an extraordinary expression of culture; the assortment of flavours, smells, colours and appearance match the diversity of the cultures from which they come and provide very visible evidence of the migration of populations and of the growing multiculturalism of many countries. Adam Lindgreen and Martin K. Hingley draw on research into European, Latin American and (Near and Far) Eastern markets to provide a comprehensive collection of original, cutting-edge research on the opportunities that the changing landscapes of ethnic, religious and cultural populations present for businesses and marketers. The New Cultures of Food uses the perspective of food culture to explore the role of food as a social agent and attitudes to new foodstuffs amongst indigenous populations and to indigenous food amongst immigrant communities. Opportunities and routes to market for exploiting growing demand for ethnic food are also investigated. This is an important book for food and consumer businesses, policy makers and researchers seeking to understand changing global markets and the significance of food as an indicator of social and religious attitude, diet and ethnic identity.

Dr Adam Lindgreen is professor of marketing at Cardiff University. Previously, he was professor of strategic marketing at Hull University Business School, U.K. After graduating in engineering, chemistry, and physics, Dr. Lindgreen first finished an MSc in food science and technology at the Technical University of Denmark and is now a European Engineer (EurIng); he then finished an MBA at Leicester University. In 2000, he received his Ph.D. at Cranfield University. As assistant professor with the Catholic University of Louvain, he represented the university in the Community of European Management Schools' inter-faculty group 'Marketing'. He was also assistant professor at Eindhoven University of Technology and a research fellow with the Eindhoven Centre for Innovation Studies. He has published widely, and his awards include Industrial Marketing Management's Outstanding Article 2005. His research interests include business and industrial marketing management, consumer behaviour, experiential marketing, and corporate social responsibility. Dr Martin K. Hingley graduated in agricultural and food marketing from the University of Newcastle upon Tyne; he has an MPhil in marketing from Cranfield University; and a PhD in marketing from the Open University. Dr Hingley was a reader in marketing and supply chain management at Harper Adams University College, the leading university in the United Kingdom specializing in agri-food business, and is now professor of strategic marketing at Lincoln University. He is also a visiting fellow to the University of Hull Business School and has previously held a fellowship endowed by Tesco Plc. Dr Hingley has wide-ranging business experience in the international food industry and has spent time in provision of market and business analysis with the Institute of Grocery Distribution. He has presented and published widely in applied food industry marketing and supply chain relationship management. He serves on the board of several scientific journals.

'This book is very well timed. It casts an innovative and wider perspective on how global migrations are affecting the way we eat food, and the religious and cultural aspects of food which increasingly influence our daily lives.' ” Lord Haskins of Skidby, former CEO of Northern Foods 'Timely, insightful and commercially-relevant, The New Cultures of Foods is an excellent contribution to melting pot marketing theory and practice!' ” Emeritus Prof. David Hughes, Imperial College London, The United Kingdom 'A rich source of thought for everyone who wants to get deeper insights in the marketing challenges and opportunities for the food and agribusiness industry induced by the fast changing landscape of ethnic, religious and cultural groups.' ” Onno Omta, Professor in Business Administration, Wageningen University, the Netherlands '...The book is divided into European, Latin American, and Asian parts with a majority of examples from the U.K. Over a long period, the U.K. has received a large number of immigrants from former Commonwealth territories, and in recent years Western Europe follows this same pattern. What can marketing learn and utilise from the buying behaviour of different groups? Can export be helped from studies of similar groups living overseas? The chapters vary from internet trade to fairly primitive conditions in India and is thereby giving thoughts to whether integration or segregation will dominate the global future...The book should be read and studied carefully by marketing and sales departments in all relevant countries and is highly recommended.' ” K.Porsdal Poulsen, Prof. h.c., Technical University of Denmark

The New Cultures of Food: Marketing Opportunities from Ethnic, Religious and Cultural Diversity