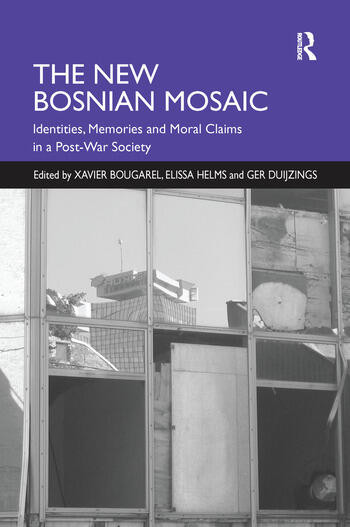 The New Bosnian Mosaic: Identities, Memories and Moral Claims in a Post-War Society

Since the violent events of the Bosnian war and the revelations of ethnic cleansing that shocked the world in the early 1990s, Bosnia has become a metaphor for the new ethnic nationalisms, for the transformation of warfare in the post-Cold War era, and for new forms of peacekeeping and state-building. This book is unique in offering a re-examination of the Bosnian case with a 'bottom-up' perspective. It gathers together cultural anthropologists and other social scientists to consider the specificities of the Bosnian case. However, the book also raises broader questions: what are the consequences of internecine violence and how should societies attempt to overcome them? Are the uncertainties and the transformations of Bosnian post-war society due entirely to the war, or are they related to wider processes encompassing post-communist Europe as a whole? And are the difficulties experienced by international state-building operations mainly due to distinctive features of the local societies or are they due to the policies promoted by the international community itself?

Contents: Introduction. Part 1 Beyond 'Ethnicity': 'Imitation of life': negotiating normality in Sarajevo under siege, Ivana Macek; Urban exile: locals, newcomers and the cultural transformation of Sarajevo, Anders Stefansson; Sarajevo no more? Identity and the sense of place among Bosnian Serb Sarajevans in Republika Srpska, Ioannis Armakolas; The power of 'armchair politicians': ethnic loyalty and political factionalism among Herzegovinian Croats, Hannes Grandits; In search of 'decent people': resistance to the ethnicization of everyday life among the Muslims of Stolac, Torsten Kolind. Part 2 Beyond 'Ancient Hatred': Commemorating Srebrenica: histories of violence and the politics of memory in Eastern Bosnia, Ger Duijzings; Death and the nationalist: martyrdom, war memory and veteran identity among Bosnian Muslims, Xavier Bougarel; Remembering with a difference: clashing memories of Bosnian conflict in everyday life, Stef Jansen. Part3 Beyond 'Protectorate': In the midst of injustice: the ICTY from the perspective of some victim associations, Isabelle Delpla; 'Politics is a whore': women, morality and victimhood in post-war Bosnia-Herzegovina, Elissa Helms; Ambivalent builders: Europeanization, the production of difference and internationals in Bosnia-Herzegovina, Kimberley Coles; Everyday work: subsistence economy, social belonging and moralities of exchange at a Bosnian (black) market, Larisa JaÅ¡arevic; Bibliography; Index.

Xavier Bougarel holds a PhD in Political Science and is Research Fellow at the Research Unit 'Ottoman and Turkish Studies' of the Centre National de la Recherche Scientifique (CNRS) in Paris. He has followed the political and religious situation in Bosnia-Herzegovina since the early 1990s and was, among others, an external consultant for the World Bank. He has also published widely on the transformation of Islam in the post-communist Balkans and on the anthropological history of violence in the region. Elissa Helms holds a PhD in Cultural Anthropology and is Assistant Professor of Gender Studies at the Central European University in Budapest. She began her engagement with Bosnians in the early-mid 1990s while working with refugees and local non-governmental organizations. For the past decade, she has been researching issues of women's activism, gender relations, and representations of gender, ethnicity and victimhood in post-war Bosnia and has published several papers and book chapters on these issues. Ger Duijzings holds a PhD in Anthropology and is Reader in the Anthropology of Eastern Europe at the School of Slavonic and East European Studies (SSEES) in London. He is Head of the Department of East European Languages and Culture. He has published widely on issues of religion and identity in Kosovo, and was one of the authors of the Srebrenica report released in 2002 by the Netherlands Institute for War Documentation (NIOD). He was also a consultant for the International Criminal Tribunal for the former Yugoslavia (ICTY).

'The New Bosnian Mosaic offers a penetrating anthropological gaze at the complex world of Bosnia today. The book both broadens and deepens our knowledge of the lived experience of war and reconstruction. A very successful integration of large historical questions and ethnographic realities, a rich source and an important contribution.' David A. Kideckel, Central Connecticut State University, USA 'Bougarel has assembled empirically rich and intellectually stimulating explorations of the inner complexity of post-war Bosnian societies. With their emphasis on "local" views and practices in a context of competitive war-related claims and intrusive international agency, these anthropological and ethnographic perspectives open new vistas on post-conflict transitions.' Professor Michael Pugh, University of Bradford, UK ’...a collection of well-researched chapters authored primarily by anthropologists studying sociocultural changes in postwar Bosnia. The authors present Bosnia in its complexity, yet do so understandably, a distinct improvement over other works...which tend toward either narrow technical concerns or sweeping generalities. The high quality of scholarship in this book... distinguishes itself by filling in some of the lacunae in what we know about postwar societies. The chapters, however, avoid generalization or comparison to cases outside the former Yugoslavia, instead dwelling on the rich detail gained from ethnographic fieldwork conducted between 1999 and 2003, pivotal years for Bosnia.’ The Russian Review 'The New Bosnian Mosaic takes on...difficult questions about the postwar situation in Bosnia with éclat. This edited collection provides a set of empirically informed and ethically honest reports on the cultural self-understsanding and social life of people in Bosnia today.' Slavic Review 'Despite the hundreds of works dedicated to the study of Bosnia, none have made as much effort to unearth the societal road blocks to progress in Bosnia; by doin

The New Bosnian Mosaic: Identities, Memories and Moral Claims in a Post-War Society