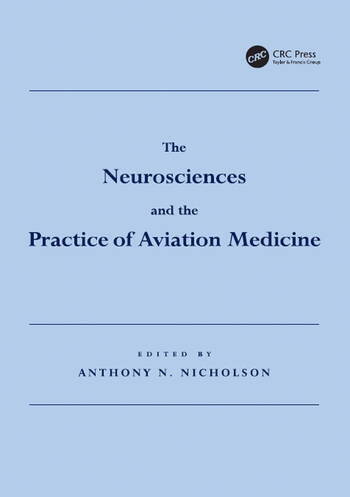 The Neurosciences and the Practice of Aviation Medicine

This book brings the neurosciences to operational and clinical aviation medicine. It is concerned with the physiology and pathology of circadian rhythmicity, orientation, hypotension and hypoxia, and with disorders of the central nervous system relevant to the practice of aviation medicine. The chapters on circadian rhythmicity and orientation deal with the impaired alertness and sleep disturbance associated with desynchrony and with the effects of linear and angular accelerations on spatial awareness. Hypotension and hypoxia cover cerebral function during increased gravitational stress, clinical aspects of exposure to acute hypoxia, the mild hypoxia of the cabin of transport aircraft, adaptation and acclimatization to altitude and decompression at extreme altitudes and in space. Disorders of particular significance to the practice of aviation medicine such as excessive daytime sleepiness, epilepsy, syncope, hypoglycaemia, headache and traumatic brain injury are covered, while neuro-ophthalmology, the vestibular system and hearing also receive detailed attention. The potentially adverse effects of the aviation environment and of disorders of the nervous system are brought together, and the text covers the neurological examination as it relates to aircrew and explores current management and therapeutics. The Neurosciences and the Practice of Aviation Medicine is an essential work for those involved in the practice of aviation medicine where familiarity with the effects of the aviation environment on the nervous system and understanding the pathophysiology of relevant clinical disorders are of prime concern. The authors from leading centres of excellence are physiologists concerned with the aviation environment and physicians involved in the day-to-day practice of medicine. They bring to this authoritative text wide experience and expertise in both the experimental and clinical neurosciences.

Anthony Nicholson graduated in medicine from the University of Birmingham. He is a Fellow of the Royal Colleges of Physicians of Edinburgh and London and of the Royal College of Pathologists, a Fellow of the Royal Aeronautical Society, an Academician of the International Academy of Aviation and Space Medicine and one time Vice-President of the Aerospace Medical Association. Air Commodore Nicholson was formerly the Commandant and Director of Research of the Royal Air Force Institute of Aviation Medicine, Farnborough, and, lately, the Visiting Professor (Aviation Medicine) at the Centre for Human and Aerospace Physiological Sciences, School of Biomedical Sciences, King's College London.

'The Editor and the assembled authors have accomplished a masterful task in relating the neurosciences to the practice of aviation medicine. This volume lays out the anatomical and functional basis in the nervous system for most of the neurological diagnoses which may be encountered in the care and qualification of those who would fly. From the neurological examination through common problems such as headache, vision and hearing reduction, hypoxia and disorientation, to the more complicated states of sleep, wakefulness, consciousness and awareness of the airman, the causes are outlined and then the reader is led to the qualification decision. This volume should be a welcome addition to the library of all the disciplines involved in Aviation Medicine, and particularly to physicians in the practice of aviation medicine.' Charles Berry, Past President, Aerospace Medical Association 'The Editor has brought together a very distinguished group of some seventeen co-authors, and, from a vantage point of over fifty years in defining the arena of neurosciences in aviation medicine, has created a volume that spans the field in its entirety, as known today. It will surely join the pantheon of major textbooks in both of these fields. The chapters cover the basics of neuroscience, the physiology and clinical applications to flight. It is copiously referenced and well illustrated with figures and tables to help clarify technical points. Of special interest to the clinician are the chapters dealing with neurological disorders and their application to the aeromedical disposition of all those who fly, and will be the definitive reference for many years to come.' Yehezkel (Geoff) Caine, Past President, International Academy of Aviation and Space Medicine 'This textbook provides the highest level of current knowledge in aviation-related human physiology and physiopathology involving the neurosciences. It reviews the classical stresses associated with flight and brings up to date the

The Neurosciences and the Practice of Aviation Medicine