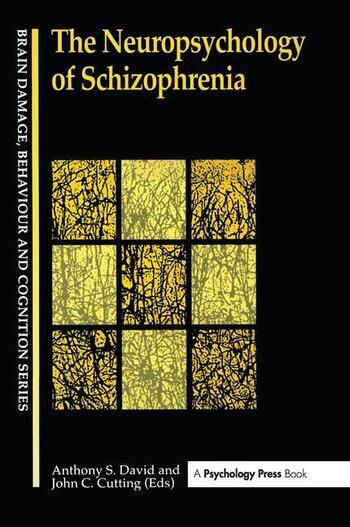 The Neuropsychology Of Schizophrenia

Schizophrenia is being increasingly viewed as a neurological disorder. The Neuropsychology of Schizophrenia addresses the key questions in modern schizophrenia research. How do abnormalities of the brain produce the characteristic signs and symptoms of this most severe and mysterious mental malady? Where are these abnormalities? How do they develop? How can we detect them? What clinical and cognitive effects do they have?
This new book is the first of its kind to tackle these questions in a systematic way from a number of allied perspectives: from phenomenology to physiology, animal behaviour to metacognition and from PET scans to paper and pencil tests. A number of authors from the United Kingdom and the United States have made contributions; all are acknowledged experts in the field. The chapters each contain a concise review of the particular topic, empirical data and also a theoretical overview.
The Neuropsychology of Schizophrenia will be required reading for all serious students of schizophrenia from both medical and psychology backgrounds.

The neuropsychological study of psychosis is a relatively new field, and this book is an excellent addition to the literature...this is a 'state of the art book.' The chapters are clearly written and the book has been well edited...this book is essential reading in order to gain an insight into approaches and models which are currently influential. - Ronan O'Carroll in Psychological Medicine.

Conference proceedings are not always an enticing read, but this publication shows that a successful conference can produce a stimulating book. Collectively its chapters (by both psychiatrists and psychologists) provide a wealth of information and ideas on current and future research into the cognitive disorders and their localisation in the brain, which underlie the symptoms of schizophrenia. - Frances Klemperer (Community Help Services, Brussels) in the British Journal of Psychiatry.

The Neuropsychology Of Schizophrenia