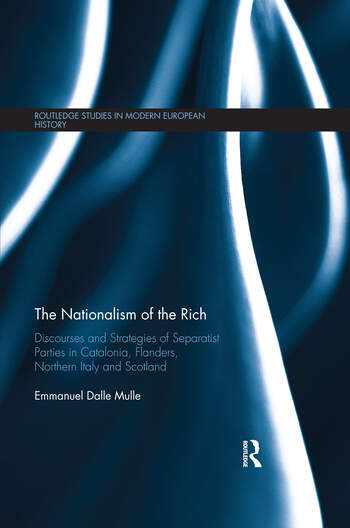 The Nationalism of the Rich: Discourses and Strategies of Separatist Parties in Catalonia, Flanders, Northern Italy and Scotland

Based on rigorous analysis of the propaganda of five Western European separatist parties, this book provides in-depth examination of the ‘nationalism of the rich’, defined as a type of nationalist discourse that seeks to end the economic ‘exploitation’ suffered by a group of people represented as a wealthy nation and supposedly carried out by the populations of poorer regions and/or by inefficient state administrations. It shows that the nationalism of the rich represents a new phenomenon peculiar to societies that have set in place complex systems of wealth redistribution and adopted economic growth as the main principle of government legitimacy. The book argues that the nationalism of the rich can be seen as a rhetorical strategy portraying independent statehood as a solution to the dilemma between solidarity and efficiency arisen in Western Europe since the end of the Glorious Thirties. It further suggests that its formation can be best explained by the following combination of factors: (1) the creation, from the end of the Second World War, of extensive forms of automatic redistribution to a scale previously unprecedented; (2) the beginning, from the mid-1970s, of an era of ‘permanent austerity’ exacerbated, in specific contexts, by situations of serious public policy failure; (3) the existence of national/cultural cleavages roughly squaring with uneven development and sharp income differentials among territorial areas of a given state.

1. The Nationalism of the Rich: A New Phenomenon

2. Catalonia: Fiscal Plundering and the End of Federalism

5. Scotland: The Economics of Independence and the Democratic Deficit

6. Cultural-Determinism and Welfare Deservingness: The Nationalisms of the Rich Compared

8. The Impact of Globalisation and European Integration

9. Beyond Discourse: Support for Independence, the Political Opportunity Structure and Party Strategies

Emmanuel Dalle Mulle is a post-doctoral researcher and project coordinator at the Graduate Institute of International and Development Studies, Geneva.

The Nationalism of the Rich: Discourses and Strategies of Separatist Parties in Catalonia, Flanders, Northern Italy and Scotland