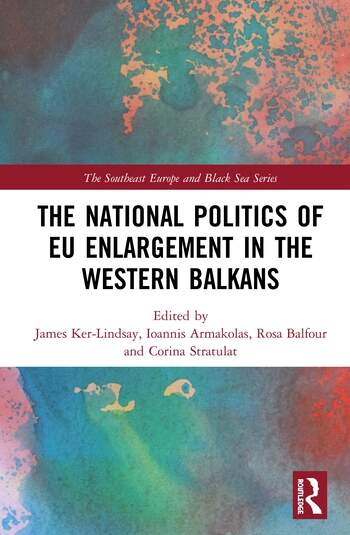 The six countries of the Western Balkans – Albania, Bosnia and Herzegovina, Kosovo, Montenegro, North Macedonia and Serbia – are on course to become the next members of the European Union. While there has been a lot of work on the ways in which these countries are preparing for accession, and how the EU as a whole approaches the question of expansion, very little attention has been paid to how individual EU member states regard enlargement into a region that presents a number of serious challenges, including the legacies of the conflicts of the 1990s, economic underdevelopment and poor governance. Focusing on key states, such as Germany, France and Italy, the neighbouring countries of Central and South East Europe, and Britain, once a leading advocate of enlargement that is now in the process of leaving the European Union, this volume casts important new empirical and conceptual light on the diverse motivations that underpin member state attitudes towards EU enlargement.

2. Between indifference and hesitation: France and EU enlargement towards the Balkans

3. The United Kingdom and EU enlargement in the Western Balkans: from ardent champion of expansion to Post-Brexit irrelevance

4. Italy and EU enlargement to the Western Balkans: the Europeanization of national interests?

5. Eurosceptic yet pro-enlargement: the paradoxes of Hungary’s EU policy

6. Greece and EU enlargement to the Western Balkans: understanding an ambivalent relationship

7. Cyprus and EU enlargement to the Western Balkans: a balancing act

James Ker-Lindsay is Visiting Professor at the London School of Economics and Political Science.

Ioannis Armakolas is Assistant Professor at the University of Macedonia and Senior Research Fellow at ELIAMEP.

Rosa Balfour is Senior Fellow at The German Marshall Fund of the United States.