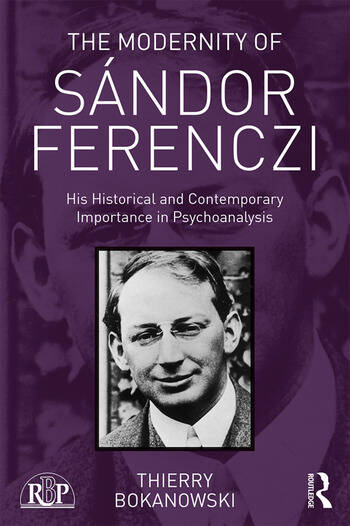 The Modernity of Sándor Ferenczi: His historical and contemporary importance in psychoanalysis

The Modernity of Sándor Ferenczi provides a concise yet thorough overview of the life and work of Sandor Ferenczi. It seeks to help make his thought and work better known, as a controversial pioneering psychoanalyst whose importance to psychoanalysis has sometimes been wrongfully neglected and relegated to backstage.

Including excerpts from his most important papers, this book gives the reader a clear guide to the major tenets of Ferenczi’s work, the psychoanalytic context in which his significant achievements occurred, and the continued importance of his work for contemporary psychoanalytic theory and clinical practice. Thierry Bokanowski examines Ferenczi’s work in three main stages:

3. A third period of calling concepts into question and advancing new concepts (1926-1933)

Bokanowski offers a detailed analysis of these three periods, illustrating them vividly by analysing Ferenczi’s numerous and very famous articles or books during these periods in a way that allows his very original way of thinking to unfold. He then examines at the theoretical level the heritage of Ferenczi’s hypotheses developed across these three time spans.

Covering Ferenczi’s relationship with Freud and with other early psychoanalysts, and his role in formulating well-established concepts such as introjection, countertransference and narcissistic splitting, The Modernity of Sándor Ferenczi provides an essential and accessible read for any student or clinician of psychoanalysis or psychoanalytic psychotherapy seeking to apply Ferenczi’s work in the present and understand the historical development of psychoanalytic ideas.

Part One The Modernity of Sándor Ferenczi

The Modernity of Sándor Ferenczi

"Introjection and transference" (1909a): the master stroke

The heritage of Ferenczi’s advances at the theoretical level

"Transference and introjection" (1909a)

"The further development of the "active therapy" in psycho-analysis (1920)

Thalassa, a Theory of Genitality

"Contra-indications to the ‘active’ psycho-analytical technique" (1926a)

"The elasticity of psycho-analytic technique" (1928a)

"The principle of relaxation and neocatharsis" (1930a)

"Confusion of tongues between adults and the child" (1933a)

Thierry Bokanowski is a psychiatrist and psychoanalyst. He is currently a training and supervising analyst at the Paris Psychoanalytical Society (SPP). He has published articles across a range of different journals including the International Journal of Psychoanalysis and has participated in numerous collective works on psychoanalysis in both French and English.

"Bokanowski’s book is an important contribution for it shows in a rigorous way how Ferenczi’s ideas are essential in our daily clinical work today. It is a poignant book, which explores the vivid dimension of love and hate between Freud and Ferenczi whose drama was to have been far in advance of his time. He underlined the distinctions between traumas and offered a metapsychological understanding of early ego-splitting, including the splitting between soul and body. As a psychosomatician, I would say that he should be seen as the Grandfather of modern post Freudian psychosomatics and especially the Paris School. Through a living and embodied style of writing, Bokanowski shows that it was their respective views of the countertransference more than anything else that separated the paths of these two giants of psychoanalysis."-Marilia Aisenstein, Training Analyst, Hellenic Psychoanalytical Society and Paris Psychoanalytical Society.

The Modernity of Sándor Ferenczi: His historical and contemporary importance in psychoanalysis