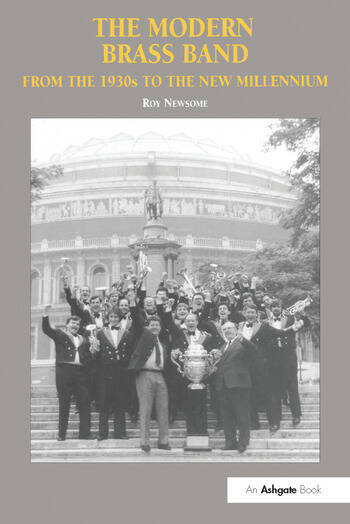 The Modern Brass Band: From the 1930s to the New Millennium

Following Roy Newsome's highly acclaimed study Brass Roots: One Hundred Years of Brass Bands and their Music, this book takes up the story of bands and their development from the 1930s to the start of the new millennium. Brass band contests continued to play a significant role in the twentieth century, and this new book contains a detailed consideration of both local and regional contests and larger-scale national events such as the British Open and the National Brass Band Championships. As in previous times, the repertoire of bands has been greatly influenced by these contests. Newsome explores competition works, but also the development of an increasing number of concerto-style works intended for concert performance. One of the keys to the continuing popularity and success of the banding movement has been the creation of school and youth brass bands. Sections of the book devoted to younger generations of band players examine the changes that have taken place in such bands. There is also an investigation of the impact of radio, television and commercial recording on the brass band industry. The book also contains a wealth of information about leading bands and band personalities, and concludes with an overview of the spread of interest in British-style banding overseas.

Roy Newsome is Research Fellow at the School of Media, Music and Performance, University of Salford, UK.

'It is a long overdue work, extensively researched, very well produced and written in an open and enjoyable narrative style that retains warmth and affection for the subject matter yet maintains a detachment of purpose that allows for well balanced critical analysis... Dr Roy Newsome should wholeheartedly be congratulated, for he has produced quite a wonderful, insightful book that should form the backbone of any brass music students reading list and deserves to be seen on the bookshelf of anyone who has more than a passing regard to the brass band movement, its history and its future.' 4barsrest.com ’.The book is engagingly written and generously illustrated throughout...Highly recommended.’ Choice

The Modern Brass Band: From the 1930s to the New Millennium