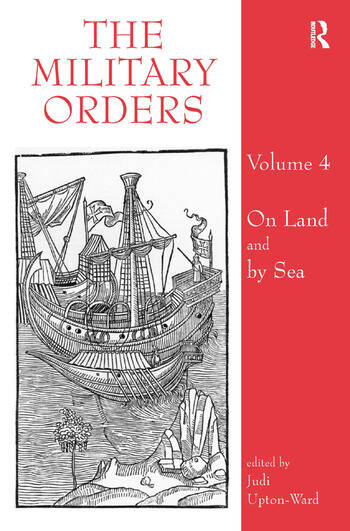 The Military Orders Volume IV: On Land and By Sea

In the last two decades there has been an explosion of scholarly interest in the Military Orders. With a history stretching from the early twelfth century to the present day, they were among the richest and most powerful orders of the church in medieval Europe. They founded their own states in Prussia and on the Mediterranean islands of Rhodes and Malta. They are of concern to historians of the Church, art and architecture, government, agriculture, estate management, banking, medicine and warfare, and of the expansion of Europe overseas. The conferences on their history, which have been organized in London every four years, have attracted leading scholars from all over the world. The present volume records the proceedings of the Fourth Conference in 2005 and is essential reading for those interested in the progress of research on these extraordinary institutions.

The twenty-seven papers published here represent a selection of those delivered at the conference. Architecture, archaeology and the part which the orders played in Europe are well represented, along with work on northern and eastern Europe. Four papers deal specifically with military or naval matters, while another four deal with the spiritual life of the brothers and sisters. Family relationships represent a growing field of interest. The majority of the papers focus on the Hospitallers, but the volume includes studies on the Templars and the Teutonic Order, as well as the Portuguese military orders.

Contents: Introduction, Jonathan Riley-Smith; Part I General Issues: Milites ad terminum in the military orders during the 12th and 13th centuries, Alan Forey; Recent issues in Polish historiography of the Crusades, Darius von Güttner Sporzynski; A comparison of health at a village and a castle in the kingdom of Jerusalem during the 12th century, Piers Mitchell; Competition between the military-religious orders in Central Europe, c.1140–c.1270, Karl Borchardt; The military orders and the Chronicle of Morea, Kristian Molin; The military orders and their navies, Jürgen Sarnowsky; A new chronology for the Scandinavian branches of the military orders, Christer Carlsson; The Portuguese military orders and the oceanic navigations: from piracy to empire (15th to early16th centuries), Luís Adão da Fonseca. Part II Specific Issues: Ecclesiastical reform and the origins of the military orders: new perspectives on Hugh of Payns' letter, Luis García-Guijarro Ramos; The Hospital of St John, the bedroom of caritas, Myra Bom; The layout of the Jerusalem hospital in the 12th century: further thoughts and suggestions, Denys Pringle; The reputation of Gerard of Ridefort, Malcolm Barber; The London and Paris temples: a comparative analysis of their financial services for the kings during the 13th century, Ignacio de la Torre; Murder in the preceptory? The strange case of Peter of Valbéon, preceptor of the Hospitaller house of St Naxient (Dordogne), 1277–1304, David Bryson; The Teutonic knights during the Ibelin-Lombard conflict, Nicholas Morton; Hospitaller estate management in the medieval kingdom of Hungary (13th to 14th centuries), Zsolt Hunyadi; Aspects of non-noble family involvement in the Order of the Temple, Jochen Schenk; Templar trial testimony: voices from 1307 to 1311, Anne Gilmour-Bryson; Funerary monuments of Hospitaller Rhodes: an overview, Anna-Maria Kasdagli; The search for the defensive system of the Knights in Southern Rhodes, Michael Heslop; Regulations concerning the reception of Hospitaller milites in the first half of the 15th century, Pierre Bonneaud; The Hospitallers and the Catholic kings of Spain, 1474–1516, Carlos Barquero Goñi; The 15th-century maritime operations of the Knights of Rhodes, Theresa M. Vann; The priory of Vrana: the Order of St John in Croatia, H.J.A. Sire; Encounters with the 'other': the Hospitallers and the Maltese before the great siege of 1565, Emanuel Buttigieg; Building biographies. Graffitti, architecture and people at the Hospitaller preceptory at Ambel (Zaragoza), Spain, Christopher Gerrard and Robert Dauber; A man with a mission: a Venetian Hospitaller on 18th-century Malta, Victor Mallia-Milanes; Select bibliography; Index.

Judi Upton-Ward is an Independent Scholar researching the Crusades and Ottoman history.

The Military Orders Volume IV: On Land and By Sea