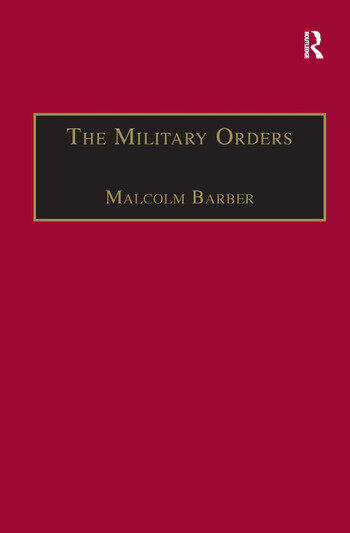 The Military Orders Volume I: Fighting for the Faith and Caring for the Sick

This volume contains papers from a conference held at the Museum of St John, under the auspices of the London Centre for the Study of the Crusades, covering every period from the origins of the military orders in the eleventh and twelfth centuries down to the present day.

Contents: Editor’s Preface; Introduction, Jean Richard; THE HOSPITAL OF ST JOHN: Pro defensione Terre Sancte: the development and exploitation of the Hospitallers’ landed estate in Essex, Michael Gervers; The character of the Hospitaller properties in Spain in the Middle Ages, Henry Sire; The Hospitallers and the Castilian–Leonese Monarchy: the concession of Royal rights, 12th to 14th centuries, Carlos Barquero Gan]i; Catholic and Protestant members in the German Grand Priory of the Order of St John: the development of the Bailiwick of Brandenburg, Walter G. Rödel; A castle in Cyprus attributed to the Hospital?, Peter Megaw; Two forged 13th century alms-raising letters used by the Hospitallers in Franconia, Karl Borchardt; How many miles to Babylon? The Devise des Chemins de Babilione redated, Robert Irwin; The Hospitallers’ medical tradition: 1291–1530, Anthony Luttrell; Documentary and archaeological evidence for Greek settlement in the countryside of Rhodes in the 14th and early 15th centuries, Kara Hattersley-Smith; The 15th century Hospital of Rhodes: tradition and innovation, Fontini Karassava-Tsilingiri; Xenodochium to sacred infirmary: the changing role of the Order of the Hospital of St John, 1522–1631, Ann Williams; Corsairs parading crosses: the Hospitallers and Venice, 1530–1798, Victor Mallia-Milanes; ‘A parish at sea’: spiritual concerns aboard the order of St John’s galleys in the 17th and 18th centuries, David Allen; The Order of St John in England, Jonathan Riley-Smith; THE ORDER OF THE TEMPLE: Hugh de Payns and the 1129 Damascus crusade, Jonathan Phillips; Templar Castles on the road to the Jordan, Denys Pringle; The architecture of the Knights Templars in England, Pál Ritoók; The surrender of Gaston and the rule of the Templars, Judi Upton-Ward; The Templars in Cyprus, Peter Edbury; Towards a profile of the Templars in the early 14th century, Alan Forey; Testimony of non-Templar witnesses in Cyprus, Anne Gilmour-Bryson; The suppression of the Templars in Cyprus according to the Chronicle of Leontios Makhairas, Aneta Iliéva; THE TEUTONIC ORDER: 800 years of the Teutonic Order, Udo Arnold; Frederick II, the Hohenstaufen, and the Teutonic Order in the Kingdom of Sicily, James M. Powell; Patronage of Elizabeth in the High Middle Ages in hospitals of the Teutonic Order in the Bailiwick of Franconia, Klaus Guth; The Teutonic Order confronts Mongols and Turks, Jürgen Sarnowsky; The treatment of prisoners of war during the fighting between the Teutonic Order and Lithuania, Sven Ekdahl; The recruitment of brethren for the Teutonic Order in Livonia 1237–1562, Klaus Militzer; Hospitality and chivalry in the Teutonic Order, Bernhard Demel; THE SPANISH ORDERS: Possessions and income of the Order of Calatrava in the kingdom of León in the 12th and 13th centuries, Carlos de Ayala Martínez; Agrarian structure in the Calatravan Lordships of the southern Meseta of Castile in the 12th and 13th centuries, Enrique Rodríguez-Picavea Matilla; Organization of land in the peninsula south-east: the commandery of Segura de la Sierra of the Order of Santiago, 1246–1350, José Vicente Matellanes Merchán; Architecture and power: the seats of the priories of the Order of Santiago, Aurora Ruiz Mateos, Jesús Espino Nun]o and Olga Pérez Monzón; THE PERCEPTIONS AND ROLE OF THE MILITARY ORDERS: The confraternity of La Sauve-Majeure: a foreshadowing of the Military Order?, Marcus Bull; Medical knowledge in the crusading armies: the evidence of Albert of Aachen and others, Susan Edgington; Crusading and patrons: the influence of the crusades on the patronage of the Order of St Lazarus in England, John Walker; The military orders in mainland Greece, Peter Lock; Knights and lovers: the military orders in the romantic literature of the 13th century, Helen Nicholson; The lawyers of the military orders, James Brundage; Philippe de Mézières and the idea of crusade, Joan Williamson; Victorian perceptions of the military orders, Elizabeth Siberry; Index.

Malcolm Barber is Emeritus Professor of Medieval History at the University of Reading, UK

The Military Orders Volume I: Fighting for the Faith and Caring for the Sick