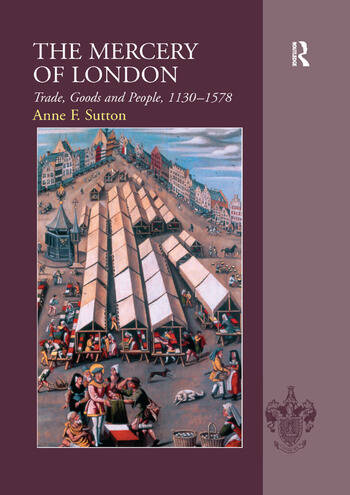 Although mercers have long been recognised as one of the most influential trades in medieval London, this is the first book to offer a comprehensive and detailed analysis of the trade from the twelfth to the sixteenth century. The variety of mercery goods (linen, silk, worsted and small manufactured items including what is now called haberdashery) gave the mercers of London an edge over all competitors. The sources and production of all these commodities is traced throughout the period covered. It was as the major importers and distributors of linen in England that London mercers were able to take control of the Merchant Adventurers and the export of English cloth to the Low Countries. The development of the Adventurers' Company and its domination by London mercers is described from its first privileges of 1296 to after the fall of Antwerp. This book investigates the earliest itinerant mercers and the artisans who made and sold mercery goods (such as the silkwomen of London, so often mercers' wives), and their origins in counties like Norfolk, the source of linen and worsted. These diverse traders were united by the neighbourhood of the London Mercery on Cheapside and by their need for the privileges of the freedom of London. Extensive use of Netherlandish and French sources puts the London Mercery into the context of European Trade, and literary texts add a more personal image of the merchant and his preoccupation with his social status which rose from that of the despised pedlar to the advisor of princes. After a slow start, the Mercers' Company came to include some of the wealthiest and most powerful men of London and administer a wide range of charitable estates such as that of Richard Whittington. The story of how they survived the vicissitudes inflicted by the wars and religious changes of the sixteenth century concludes this fascinating and wide-ranging study.

Contents: Foreword; Preface; Definition and location: the London Mercery, 1130s-1230s; 'The poor pedlar makes more noise crying his goods than does a rich mercer all his valuable wares': the mercery trade in the 13th century; The origins and early associations of London mercers, 1270s-1340s; 'Loving companions who are dwelling in the good city of London': the commonalty of the mercery; The company and the city 1348-94: from the Black Death to the First Charter; 'Le compaignie del mercerie que dieux veul garder de male et de perile et tutditz convoier a bon aventure': the move into mercantile status, 1290s-1430; Success on all sides: the mercers in 15th-century London; The mercery trade in London: prosperity and conflict; 'C'était une vie d'aventures semblable Ã  celle des chevaliers': the mercers' ascendancy among the adventurers in the Low Countries, 1430s-85; 'All merchandise shall have its course and merchants to have their communication each with other': trade, 1430s-85; 'Give to every man that which is his': the mercers and the merchant adventurers, 1485-1520s; New responsibilities and losses, 1490s-1550s; Religious change, wealth and faith; 'The present understanding of the feat of the merchant adventurer': overseas trade, 1520s-80s; The demise of the medieval mercery; 'A sample and light': charity and protestantism; A new company?; Appendices; Bibliography; Index.

Anne F. Sutton is Historian Emerita to the Mercers' Company of London, UK.

’Through its sheer richness and thoroughness, this study succeeds in demonstrating how one major medieval and early modern guild had very blurred lines of demarcation and reflected quite heterogeneous interests... Highly recommended.’ Choice '... published on a scale rare in modern monographs, whose length reflects both the chronological breadth and interpretative depth of this research.' History 'This massive study throws new light on the history of London, and frequently on regional changes as well.' Northern History 'Anne Sutton's formidable study of the mercers' trade of medieval and sixteenth-century London is a major contribution to the economic and social history of the capital... This is densely argued, meticulously researched, and a thoroughly rewarding book, which deserves to be read widely outside the limited circle of guild aficionados.' Economic History Review 'Anne Sutton's clear and detailed history of the mercery trade in London succeeds in charting the development of one of the most influential trades of the medieval period. Through an exhaustive study of a wide range of surviving records, the book very effectively analyzes this trade, the mercers' rise to a dominant position, and their ultimate demise in the late sixteenth century... This is Anne Sutton's magnum opus. The book wholly succeeds in its task of clarifying in detail the long and complex history of the medieval mercers and their company and clearly demonstrates Sutton's extensive knowledge of the trade... It will be of interest, and is highly recommended, to all those interested in medieval business, particularly the cloth trade.' Business History Review ’This is a deeply researched business and guild history to which all students of sixteenth-century English economic history must refer. Sutton has a broad understanding of how the early modern business system worked and has built a platform of knowledge upon which many others can build. She must have realized that her boo