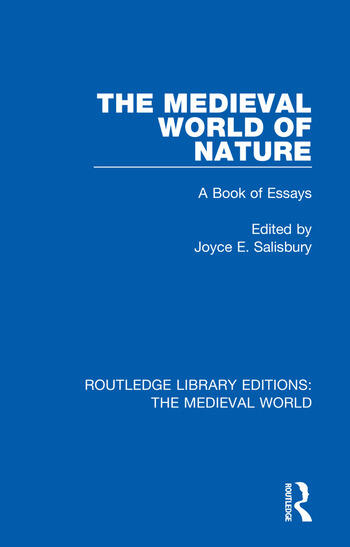 The Medieval World of Nature: A Book of Essays

Originally published in 1993, The Medieval World of Nature looks at how the natural world was viewed by medieval society. The book presents the argument that the pragmatic medieval view of the natural world of animals and plants, existed simply to serve medieval society. It discusses the medieval concept of animals as food, labour, and sport and addresses how the biblical charge of assuming dominion over animals and plants, was rooted in the medieval sensibility of control. The book also looks at the idea of plants and animals as not only pragmatic, but as allegories within the medieval world, utilizing animals to draw morality tales, which were viewed with as much importance as scientific information. This book provides a unique and interesting look at the everyday medieval world.

3. The Protohistory of Pike in Western Culture, Richard C. Hoffmann

5. Martyrs and Monks, Insects, and Animals, Maureen A. Tilley

6. The Shadow of Reason: Explanations of Intelligent Animal Behavior in the Thirteenth Century, Peter G. Sobol

7. The Goddess Natura in the Occitan Lyric, Veronica Fraser

8. Wild Folk and Lunatics in Medieval Romance, David A. Sprunger

Part III: People and the Land

The Medieval World of Nature: A Book of Essays