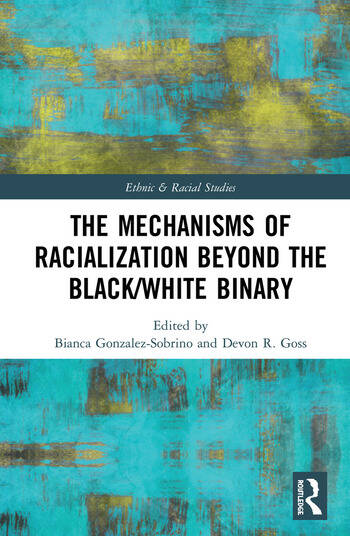 The Mechanisms of Racialization Beyond the Black/White Binary

This book focuses on the mechanisms that undergird the operation of racialization and works to empirically define the specific mechanisms by which racialization outside of black-white paradigm operates.

Serving as a guiding point to future research, this book will be of interest to all scholars of race, and those seeking to understand the ideologies, actions, interactions, structures and social practices associated with racialization. This book was originally published as a special issue of Ethnic and Racial Studies.

Introduction: Exploring the mechanisms of racialization beyond the black-white binary

1. Accommodation crisis: the racialization of travellers in twenty-first century England

5. Moving beyond (and back to) the black-white binary: a study of black and white Muslims’ racial positioning in the United States

6. MOU or an IOU? Latina/os and the racialization of media policy

Jason A. Smith and Randy Abreu

Bianca Gonzalez-Sobrino is an Assistant Professor of Sociology at Quinnipiac University, USA. Her research examines ethnic competition and racial threat, particularly the dialectical relationship between identity and constructions of perceived threats; the processes of racial identity formation, particularly looking at Puerto Ricans; and the role of media in the construction and processes of racial and ethnic boundary making. Her work has appeared in various scholarly journals.

Devon R. Goss is an Assistant Professor of Sociology at the Oxford College of Emory University, USA. Her research examines the color line, particularly in relation to instances of boundary crossing in typically racialized institutions; and the impact of racialization in family formation and processes, through an examination of transracial adoption. She has published in a variety of scholarly journals and is the co-author of Diversity in Black Greek-Letter Organizations: Breaking the Line (with Wendy Marie Laybourn, 2018).

The Mechanisms of Racialization Beyond the Black/White Binary