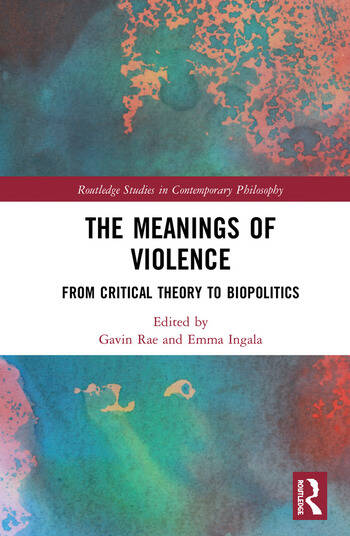 The Meanings of Violence: From Critical Theory to Biopolitics

Violence has long been noted to be a fundamental aspect of the human condition. Traditionally, however, philosophical discussions have tended to approach it through the lens of warfare and/or limit it to physical forms. This changed in the twentieth century as the nature and meaning of â€˜violenceâ€™ itself became a conceptual problem. Guided by the contention that Walter Benjaminâ€™s famous 1921 â€˜Critique of Violenceâ€™ essay inaugurated this turn to an explicit questioning of violence, this collection brings together an international array of scholars to engage with how subsequent thinkersâ€”Agamben, Arendt, Benjamin, Butler, Castoriadis, Derrida, Fanon, Gramsci, Merleau-Ponty, Sartre, and Schmittâ€”grappled with the meaning and place of violence. The aim is not to reduce these multiple responses to a singular one, but to highlight the heterogeneous ways in which the concept has been inquired into and the manifold meanings of it that have resulted. To this end, each chapter focuses on a different approach or thinker within twentieth and twenty-first century European philosophy, with many of them tackling the issue through the mediation of other topics and disciplines, including biopolitics, epistemology, ethics, culture, law, politics, and psychoanalysis. As such, the volume will be an invaluable resource for those interested in Critical Theory, Cultural Studies, History of Ideas, Philosophy, Politics, Political Theory, Psychology, and Sociology.

The Meanings of Violence: Introduction Gavin Rae and Emma Ingala

1. Walter Benjamin and the General Strike: Non-Violence and the Archeon James Martel

2. Violence, Divine or Otherwise: Myth and Violence in the Benjamin-Schmitt Constellation Hjalmar Falk

4. The Violence of Oblivion: Hannah Arendt and the Tragic Loss of Revolutionary Politics Liesbeth Schoonheim

5. The World and the Embodied Subject: Humanism, Terror, and Violence Stephen A. Noble

6. Dialectics got the Upper Hand: Fanon, Violence, and the Quest[ion] of Liberation Nigel C. Gibson

Part III: From Subjectivity to Biopolitics

9. Taming the Little Screaming Monster: Castoriadis, Violence, and the Creation of the Individual Gavin Rae

10. Judith Butler: From a Formative Violence to an Ethics of Non-Violence Emma Ingala

11. Biopolitics and Resistance: The Meaning of Violence in the Work of Giorgio Agamben German Primera

Gavin Rae is Conex Marie Sklodowska-Curie Experienced Research Fellow at the Universidad Carlos III de Madrid, Spain. He is the author of Realizing Freedom: Hegel, Sartre, and the Alienation of Human Being (2011); Ontology in Heidegger and Deleuze (2014); The Problem of Political Foundations in Carl Schmitt and Emmanuel Levinas (2016); and co-editor (with Emma Ingala) of Subjectivity and the Political: Contemporary Perspectives (Routledge: 2018).

is Senior Lecturer in the Department of Theoretical Philosophy and Vice-Dean of Academic Organization in the Faculty of Philosophy at the Universidad Complutense de Madrid, Spain. She specializes in post-structuralist thought, political anthropology, feminist theory and psychoanalysis, and is the co-editor (with Gavin Rae) of Subjectivity and the Political: Contemporary Perspectives (Routledge: 2018).

The Meanings of Violence: From Critical Theory to Biopolitics