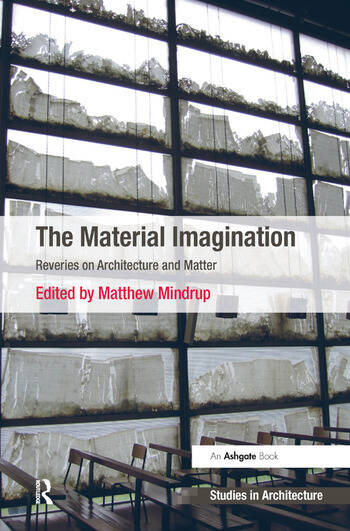 The Material Imagination: Reveries on Architecture and Matter

In recent years architectural discourse has witnessed a renewed interest in materiality under the guise of such familiar tropes as 'material honesty,' 'form finding,' or 'digital materiality.' Motivated in part by the development of new materials and an increasing integration of designers in fabricating architecture, a proliferation of recent publications from both practice and academia explore the pragmatics of materiality and its role as a protagonist of architectural form. Yet, as the ethos of material pragmatism gains more popularity, theorizations about the poetic imagination of architecture continue to recede. Compared to an emphasis on the design of visual form in architectural practice, the material imagination is employed when the architect 'thinks matter, dreams in it, lives in it, or, in other words, materializes the imaginary.' As an alternative to a formal approach in architectural design, this book challenges readers to rethink the reverie of materials in architecture through an examination of historical precedent, architectural practice, literary sources, philosophical analyses and everyday experience. Focusing on matter as the premise of an architect’s imagination, each chapter identifies and graphically illustrates how material imagination defines the conceptual premises for making architecture.

Matthew Mindrup is an Assistant Professor of Architecture at the University of Canberra, Australia.

’This lively collection of chapters both validates and extends the tradition of Gaston Bachelard's psychoanalytics of fire, earth, air and water, extended through Marco Frascari's concept of the materiality of the imagination as an "imagination of and by materials�. While there is no allegiance to a single philosophy or methodology, these authors seem to be of a common mind about architecture's future - there is one, to begin with ... but a good future is dependent on the imagination as an active and provocative force which, through disciplined ingenuity, may avoid the cataclysm of an earth made unlivable on a number of counts. Architecture has been a part of the problem; these essays suggest it may also be a part of the solution.’ Donald Kunze, Professor of Architecture and Integrative Arts, Emeritus, Penn State University, USA ’The chapters of this book clarify and extend recent attempts at a great reversal in architectural practice and theory: overcoming the centuries-old prejudice that the materials of a built work are insignificant until they are given form and shape through design and construction. Argued instead is that they have propensities, potentialities, and capacities that attentive and imaginative design practices (poetics) work with and against. Materials are not only formed by but also inform the building’s geometries, finishes, and colors. Mannerist architects figure prominently in this account, also the great modernists, and many of our contemporaries - all of whom think with, not about, materials. This book helps us see materials in a new way, and more largely, architecture itself.’ David Leatherbarrow, University of Pennsylvania, USA

The Material Imagination: Reveries on Architecture and Matter