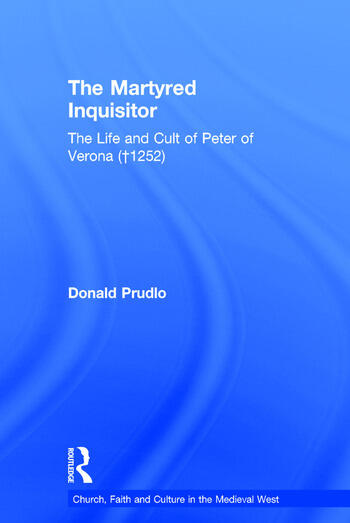 The Martyred Inquisitor: The Life and Cult of Peter of Verona (†1252)

Peter Martyr was one of the central Dominican saints of the thirteenth century, in some cases eclipsing Dominic himself. Born in Verona around 1206 to those with Cathar sympathies, he became a convert to Catholicism. As one of the first generations of Dominicans, he represents aspects of their primitive history both as a spellbinding preacher and as one of the earliest and most famous papal inquisitors. In 1252, shortly after his official appointment to the post of inquisitor for Lombardy, Peter was assassinated at the hands of a cabal of Milanese heretics. That there is no modern monograph on Peter represents a considerable lacuna in the study of medieval saints. This work therefore fills a very important gap, in both thirteenth century hagiographical studies, and studies of the interrelationship of heresy and imperial politics in the mid-thirteenth century. The first half of the book is a systematic study of the stages in the life, miracles and posthumous cult of Peter of Verona. Part One deals with many controversial issues of Peter's life, such as his role in the growth of the Dominican order and related confraternities in Lombardy and Tuscany, his status as papal inquisitor and his preaching. Part Two explores the cult of Peter Martyr. The brief time which elapsed between death and canonization makes Peter Martyr an especially interesting case in the field of cult study as for him, life led immediately to cult: a cult dominated by those who knew him personally. The second half of the book is a translation into English of the major primary sources concerning Peter. These will be of interest to students of papal canonization, the Dominican order, the Inquisition, hagiography, and local history.

’This study of the Dominican 'Peter Martyr', an exceedingly professional contribution to the Church, Faith and Culture in the Medieval West series, provides the first overview of materials for the life of Peter of Verona since a major article of 1953, and the first ever integrated survey of evidence, not least iconographic (exemplified by the ten well-reproduced images), of his cult. ...the judicious manner of Prudlo's handling of evidence inspires confidence throughout.’ Journal of Ecclesiastical History ’Prudlo’s meticulous care”the corrections of previous errors and points of confusion, the thorough chronology of Peter’s life, the painstaking reconstruction”is a gift to those interested in Italian cities, heresy, the processes of forming a cult, and lay ability to reshape a saint.’ Catholic Historical Review

The Martyred Inquisitor: The Life and Cult of Peter of Verona (†1252)