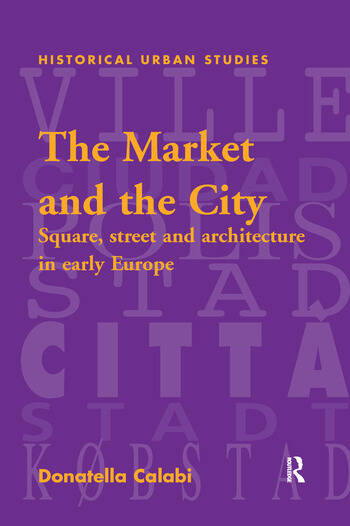 The Market and the City: Square, Street and Architecture in Early Modern Europe

The early modern period is often characterised as a time that witnessed the rise of a new and powerful merchant class across Europe. From Italy and Spain in the south, to the Low Countries and England in the north, men of business and trade came to play an increasingly pivotal role in the culture, politics and economies of western Europe. This book takes a comparative approach to the effect such merchants and traders had on the urban history of market places - streets, squares and civic buildings - in some of the great commercial European cities between the fifteenth and seventeenth centuries. It looks at how this in period, the transformations of designated commercial areas were important enough to modify relationships throughout the entire urban context. Market places tend to be very ancient, continuing to function for centuries on the same location; but between the middle of the fourteenth and the first decades of the seventeenth, their structures began to change as new regulations and patterns of manufacture, distribution and consumption began to install a new uniformity and geometry on the market place. During the period covered by this study, most major European cities undertook the rebuilding of entire zones, constructing new buildings, demolishing existing structures and embellishing others. This book analyses the intentions of innovation, in parallel with sanitary and hygienic reasons, the juridical regulations of the architecture of certain building types and the urban strategies as efficient tools to better control the economic activities within the city.

Contents: List of illustrations, General editors' preface, Acknowledgements, Abbreviations, Introduction. Part I Market spaces and urban structure: Orbem in Urbe Vidimus...: Towards a topography of trade in the early modern city; Studying the configuration of space; The notion of portus: a permanent square; Order amidst mixed use; Thousands of variations: the transmission of models; Long-term reform; The 'longue durée' and architectural history. The 'Ease of Provisioning': Sites and images; The market insula; The bridge with shops; Physical discontinuity, chronological continuity. The Market in the City: At the beginning, on the outskirts: Venice; Paris; Nuremberg; Elsewhere, in the centre: Augsburg; LÃ¼beck; Little by little, greater articulation: Venice, once again; Florence; Antwerp; Amsterdam; The diffused model: Seville; London; Diversity, fragmentation, form. Disorder and Mixed Use: The Concept of 'Boundary': Norms and increasing trade; Interference and interplay: stands, shops, houses; Ownership and conflicts of interest; The culture of the square and its image; Legal and physical boundaries. Part II Commercial Buildings: Use and Form: The Regularity of the Square: The square's geometry and the 'line' of shops: Venice: San Giacomo at Rialto; Florence: the Uffizi and the corridor; Genoa and Piazza Banchi; Seville and the problem of the 'plaza mayor'; Some buildings: Covered markets, halles, drapperie; La Halle aux Draps; The Fabbriche Vecchie; The Clothworkers' Hall; Bread, meat, fish, fruit and vegetables: Along the banks of the Grand Canal; In the centre of Florence; In the cities of Spain; In the city of London; Banks, business and the bourse: The Antwerp bourse; The Royal Exchange of London; The Amsterdam bourse; The Casa Lonja of Seville; The Loggia of Genoa; Fondaci: public warehouses and lodgings: The surplus granaries: The 'albergarie' of the Germans, Turks and Persians in Venice; The Hansa House in Antwerp; Index.

'The strengths of this ambitious monograph lie in the breadth and depth of its research, in the concise but always appropriate attention to fine detail, and in the importance of the questions it raises.' Urban History ’The translation of Donatella Calabi's Il mercato e la cittÃ : Piazze, strade, architetture d'Europa in etÃ  moderna (Venice, 1993) makes available to English-speaking scholars one of the few comparative histories of late medieval and early modern European cities... Calabi's work is based on an enormous body of sources, largely secondary, and she is to be commended for such thorough research and mastery of a wide body of English and foreign-language material.’ Journal of Modern History

The Market and the City: Square, Street and Architecture in Early Modern Europe