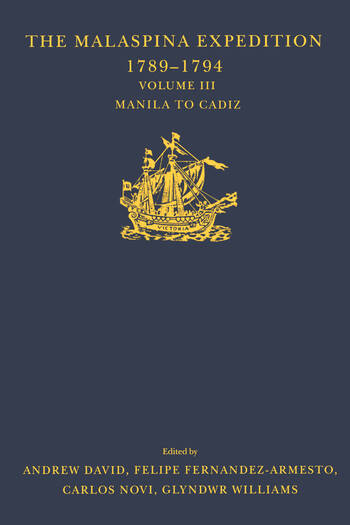 Among the voyages of exploration and surveying in the late 18th century, that of Alejandro Malaspina best represents the high ideals and scientific interests of the Enlightenment. In July 1789 he sailed from CÃ¡diz in the purpose-built corvettes, Descubierta and Atrevida. On board the vessels were scientists and artists and an array of the latest surveying and astronomical instruments. The voyage lasted more than five years. On his return Malaspina began work on seven-volume account of the voyage, to dwarf the narratives of his predecessors in the Pacific such as Cook and Bougainville. But he became involved in political intrigue, was imprisoned, and then spent the rest of his life in obscure retirement in Italy. He never resumed work on the great edition, and his journal remained long unpublished. Only now is justice being done to the achievements of what for long was a forgotten voyage. This is the final volume of the series of three which presents Malaspina's journal for the first time in English translation and with commentary. It covers the expedition's return voyage from Manila, its visits to New Zealand, Australia, the Tonga Islands and the Falklands, and its arrival in CÃ¡diz on 21 September 1794. Appendices contain Bustamante's survey of East Falkland Island, his visit to Puerto de la Soledad and his search for Islas Auroras, an account of Malaspina's arrest and the suppression of his report, and details of the two corvettes with lists of their complement and of the scientific instruments and books taken on the expedition.

Andrew David served for more than forty years in the Royal Navy, including a period (I961-85) at the Hydrographic Office of the Ministry of Defence. Among his many publications is The Voyage of HMS Herald to Australia and the Pacific 1852-61 (1995), and he was the chief editor of The Charts and Coastal Views of Captain Cook's Voyages (1988-97). Felipe FernÃ¡ndez-Armesto is Professor of Global Environmental History and a Professorial Fellow at Queen Mary, University of London. He is also a member of the Modern History Faculty of Oxford University. His publications include many papers on maritime, cartographic and early colonial history, and among recent books, Civilisations (2000) and Food: A History (2001). Carlos Novi was from 1972 to 1989 Head of the Spanish Translation Section, and Director with special responsibility for the harmonization of terminology, at the United Nations International Maritime Organization (London). After retiring from the IMO in 1989 his life-long interest in naval history became a full-time pursuit. Glyndwr Williams is Emeritus Professor of History at Queen Mary, University of London. His research interests include North American and Pacific exploration history; and among his recent publications are The Great South Sea (1997) and The Prize of all the Oceans (1999).