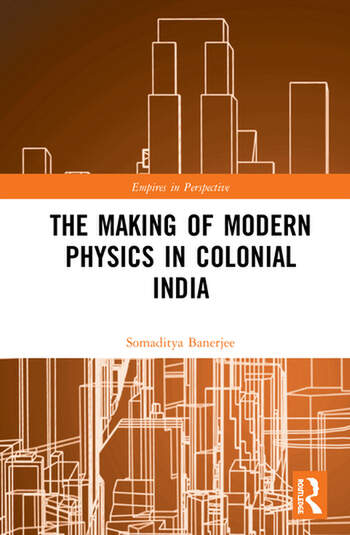 The Making of Modern Physics in Colonial India

This monograph offers a cultural history of the development of physics in India during the first half of the twentieth century, focusing on Indian physicists Satyendranath Bose (1894-1974), Chandrasekhara Venkata Raman (1888-1970) and Meghnad Saha (1893-1956). The analytical category "bhadralok physics" is introduced to explore how it became possible for a highly successful brand of modern science to develop in a country that was still under colonial domination. The term Bhadralok refers to the then emerging group of native intelligentsia, who were identified by academic pursuits and manners. Exploring the forms of life of this social group allows a better understanding of the specific character of Indian modernity that, as exemplified by the work of bhadralok physicists, combined modern science with indigenous knowledge in an original program of scientific research.

The three scientists achieved the most significant scientific successes in the new revolutionary field of quantum physics, with such internationally recognized accomplishments as the Saha ionization equation (1921), the famous Bose-Einstein statistics (1924), and the Raman Effect (1928), the latter discovery having led to the first ever Nobel Prize awarded to a scientist from Asia. This book analyzes the responses by Indian scientists to the radical concept of the light quantum, and their further development of this approach outside the purview of European authorities. The outlook of bhadralok physicists is characterized here as "cosmopolitan nationalism," which allows us to analyze how the group pursued modern science in conjunction with, and as an instrument of Indian national liberation.

1. Introduction: Writing a History of Modern Science in South Asia

3. Satyendranath Bose and the Concept of Light Quantum

Appendix A: Satyendranath Bose’s letter from Berlin to Jacqueline Eisenmann in 1926

Appendix G: Hermann Mark letter of reference for Bose, May 9, 1926

Somaditya Banerjee is an Assistant Professor in the Department of History and Philosophy at Austin Peay State University, Tennessee.

“By exploring the intellectual and sociocultural conditions for doing quantum physics in 1920s colonial India from a non-Eurocentric angle, this book fills a void in the history of physics literature. Banerjee studies three important Indian physicists and identifies them as bhadraloks, a sort of Indian Bildungsbürger. Little more than their names and key contributions were known so far. This changes with this book, making it an important reference not just for historians of science, but for anyone interested in colonial history.”

“Everybody familiarized with physics possibly have once asked how the Bose-Einstein statistics and the Raman effect were produced in colonial India in the early part of the 20th century. Banerjee’s remarkable book mobilizes the cultural history and the idea of “bhadralok physics” to examine the group of intellectuals who looked for scientific goals as part of their social and cultural identities. The book fulfills an overdue gap in the history of physics.”

“Banerjee grapples skillfully with a crucial question – how was early 20th century India able to develop advanced physics research while under colonial rule?  The case studies of Bose, Raman, and Saha document a novel system of indigenous knowledge production - “bhadralok physics.”  This unprecedented book takes seriously the technical physics as well as the cultural diversity of India. It powerfully demonstrates how a postcolonial analysis can reveal an entirely new chapter in the history of modern physics.”

“In The Making of Modern Physics in Colonial India, Banerjee addresses a sadly neglected issue in the history of modern science and provides insightful answers to some central questions about the development of science. He shows how Indian scientists contributed major discoveries in the development of quantum physics, the most esoteric and novel branch of science at the time. He argues that this groundbreaking work was a part of the development of Indian nationalism and was very much a home grown phenomenon as major thinkers emerged from the bhadralok class of middle-class intellectuals and the movement for Indian self-rule. This engaging and well-written book is at once an important contribution to our understanding of scientific development in colonial and post-colonial societies and to our understanding of the development of quantum mechanics.”

“This monograph offers a new perspective on the history of physics and modernity in early twentieth-century India.  Transcending earlier approaches to global science as hybridity or the interaction of center/periphery or universal/local, Banerjee argues that early Indian quantum physicists reveal features of what he calls “cosmopolitan nationalism” or the melding of traditional Indian culture, British cultural traits and transnational ideas.  This book situates the careers of three India-born and -educated physicists--Satyendranath Bose (1894-1974), Chandrasekhara Venkata Raman (1888-1970), Meghnad Saha (1893-1956)—within the Bengali middle-class intelligentsia known as the Bhadraloks.  Living in a colonial situation, these physicists sought international collaborations outside the British empire and turned, in particular, to Germany. Banerjee’s history of bhadralok physics is a fascinating study of colonialism and decolonialism, Indian nationalism and modernity, cosmopolitanism, and dynamics of class, caste and social manners. This book will engage a wide range of readers, especially those interested in science studies on a global scale.”

“This is a fascinating and much needed account of the remarkable rise of physics in colonial India from humble beginnings to world-class status in quantum physics during the first half of the 20th century. Drawing upon his expertise in Indian and international scientific history and culture, Somaditya Banerjee provides an engaging story of broad interest and insight.”

“This is a riveting analysis of how imperial science intersected with indigenous knowledge through the works of three twentieth-century scientists, S.N. Bose, C.V. Raman, and Meghnad Saha. It argues that their globally acclaimed interventions in relativity and quantum physics helped produce a radical variety of cosmopolitan nationalism. Somaditya Banerjee’s engaging discussion of ‘bhadralok physics’ emerges as an essential reading on the intellectual lineages of colonial and Asian modernities, intersectional knowledge production, local and global histories of science and technology.”

“How did quantum physics research start in India, while it was still under the British colonial rule? Somaditya Banerjee’s book answers this question by studying the cases of three Indian physicists, Satyendranath Bose, Chandrasekhara Venkata Raman, and Meghnad Saha, whom Banerjee considers as “bhadralok scientists.” It is a fascinating read that explores physics and its socio-cultural context in India and expands the scope of the history of quantum physics beyond Europe and North America.”

“Somaditya Banerjee’s The Making of Modern Physics in Colonial India is a case study of three Indian physicists Meghnad Saha, C. V. Raman and Satyendranath Bose. All three of them made foundational contributions to the then nascent field of quantum mechanics. Their physics is now standard text book material. However, with his training in both physics and history, Banerjee brings a fascinating and new perspective to their story. Somaditya’s unique contribution is the careful study of the socio-political and cultural milieu which played a key role in shaping Saha, Raman and Bose’s science. This detailed and careful work is a very important contribution to the history of science in India, and should be of interest to scientists, social scientists, historians as well as the lay public.”

The Making of Modern Physics in Colonial India