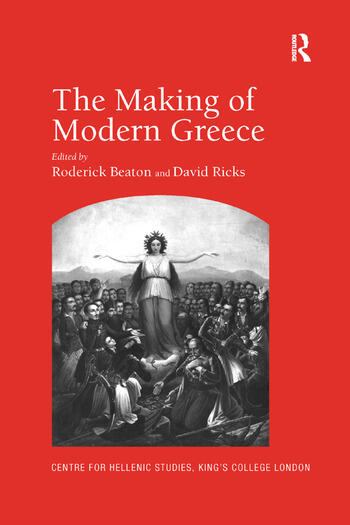 The Making of Modern Greece: Nationalism, Romanticism, and the Uses of the Past (1797–1896)

Every Greek and every friend of the country knows the date 1821, when the banner of revolution was raised against the empire of the Ottoman Turks, and the story of 'Modern Greece' is usually said to begin. Less well known, but of even greater importance, was the international recognition given to Greece as an independent state with full sovereign rights, as early as 1830. This places Greece in the vanguard among the new nation-states of Europe whose emergence would gather momentum through to the early twentieth century, a process whose repercussions continue to this day. Starting out from that perspective, which has been all but ignored until now, this book brings together the work of scholars from a variety of disciplines to explore the contribution of characteristically nineteenth-century European modes of thought to the 'making' of Greece as a modern nation. Closely linked to nationalism is romanticism, which exercised a formative role through imaginative literature, as is demonstrated in several chapters on poetry and fiction. Under the broad heading 'uses of the past', other chapters consider ways in which the legacies, first of ancient Greece, then later of Byzantium, came to be mobilized in the construction of a durable national identity at once 'Greek' and 'modern'. The Making of Modern Greece aims to situate the Greek experience, as never before, within the broad context of current theoretical and historical thinking about nations and nationalism in the modern world. The book spans the period from 1797, when Rigas Velestinlis published a constitution for an imaginary 'Hellenic Republic', at the cost of his life, to the establishment of the modern Olympic Games, in Athens in 1896, an occasion which sealed with international approval the hard-won self-image of 'Modern Greece' as it had become established over the previous century.

Contents: Introduction, Roderick Beaton; Part I Nationalisms Compared: the View from the Early 21st Century: Paradigm nation: the study of nationalism and the 'canonization' of Greece, Paschalis M. Kitromilides; What the Greek model can, and cannot, do for the modern state: the German perspective, Suzanne Marchand; Modern nations and ancient models: Italy and Greece compared, Henrik Mouritsen. Part II Towards a National History: Greek and Western Perspectives: European historiographical influences upon the young Konstantinos Paparrigopoulos, Ioannis Koubourlis; Europe, the classical polis, and the Greek nation: Philhellenism and Hellenism in 19th-century Britain, Margarita Miliori. Part III Defining Identity (1): Religion and the Nation State: From resurrection to insurrection: 'sacred' myths, motifs, and symbols in the Greek war of independence, Marios Hatzopoulos; Revisiting religion and nationalism in 19th-century Greece, Effi Gazi. Part IV Defining Identity (2): Insiders vs. Outsiders: The notion of nation: the emergence of a national ideal in the narratives of 'inside' and 'outside' Greeks in the 19th century, Yanna Delivoria; From privileged outcasts to power players: the 'romantic' redefinition of the Hellenic nation in the mid-19th century, Socrates D. Petmezas; Model nation and caricature state: competing Greek perspectives on the Balkans and Hellas (1797-1896), Basil C. Gounaris. Part V The Colonial Experience: Politics and Society in the Ionian Islands: Radical nationalism in the British protectorate of the Ionian islands (1815-1864), Eleni Calligas; Class and national identities in the Ionian islands under British rule, Athanasios Gekas. Part VI Language and National Identity: A language in the image of the nation: modern Greek and some parallel cases, Peter Mackridge; The language question and the diaspora, Karen van Dyke. Part VII The Nation in the Literary Imagination: The nation between utopia and art: canonizing Dionysios Solomos as the 'nationa

'[This] publication is welcome for it provides students of modern Greek nationalism access to a set of uniformly excellent contributions ... all the essays are especially strong examples of carefully researched monographs that shed light on important aspects of the evolution of nineteenth-century nationalism.' Historein

The Making of Modern Greece: Nationalism, Romanticism, and the Uses of the Past (1797–1896)