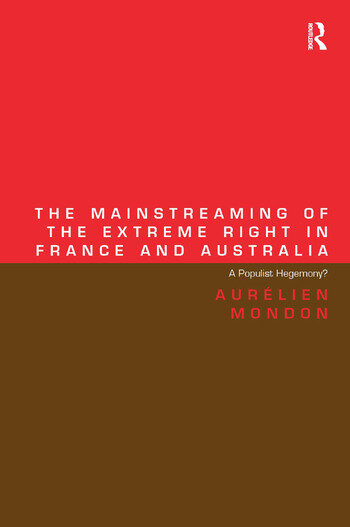 The Mainstreaming of the Extreme Right in France and Australia: A Populist Hegemony?

What has led to the recent revival of the extreme right in Western democracies such as France and Australia, and what impact has their success had on mainstream politics? What shift has taken place in recent times as ideas and groups that once were considered marginal and undemocratic have come to play an important part in mainstream politics? This book addresses these key questions by examining the resurgence of the extreme right in France and Australia and explores the history of right-wing groups and their relationship with and impact on mainstream politics. This compelling study on the rise of right-wing parties in two countries with different histories but similar experiences of how mainstream parties campaigned and reacted to the changing political landscape presents a fascinating comparison of the history and political impact of ethno-exclusivist and right-wing populist politics in liberal democracies. A detailed and thorough comparative analysis of parties such as the Front National and One Nation, and the mainstreaming of their discourse by prominent leaders like John Howard and Nicolas Sarkozy, offers new insights on the rise of the contemporary extreme right and how these groups and the ideas they represent have become increasingly mainstream, and perhaps even hegemonic in the current political state.

Aurélien Mondon is a Lecturer in French Studies at the University of Bath. His work focuses on the recent mainstreaming of the extreme right, and the impact of neo-racist and right-wing populist discourse on Liberal Democracies.

’Aurélien Mondon has written a brilliant and original book. It involves a comparative history of the French and Australian right in the longue durée and shows how the post-war extreme right parties - the Front National in France and One Nation in Australia - absorbed the inner-spirit of both nations’ very different right-wing traditions and were then able to transform the rhetoric and the tone of politics, especially on questions connected to ethnicity and race, under Sarkozy in France and Howard in Australia. This work will change the way scholars view the significance of the resurgence of the populist right in Europe and beyond.’ Robert Manne, La Trobe University, Australia ’In spite of their different histories and political cultures, France and Australia have been prime examples of a broader trend: the ’mainstreaming’ of far right discourses and previously taboo issues associated with them. Mondon’s fascinating but also sobering book shows why the far right’s electoral performance is a misleading indicator of its political influence; behind it lies a more complex dynamic of ideological normalisation, which may easily serve the far right in the longer term.’ Aristotle Kallis, Lancaster University, UK ’This book provides an original and informed study of the nature and narratives of the extreme right in two developed countries where questions of identity, immigration and the negotiation of change figure prominently in public debate. It makes a valuable contribution to comparative political analysis and will appeal to readers interested in how key populist extremist parties impact on contemporary politics and society.’ Paul Hainsworth, University of Ulster, UK 'The comparison of two historically and economically diverse cases is well made and the reader is left with the strong impression that the socio-politico-cultural hegemony of the extreme and radical right, if not yet achieved, remains an eventuality to be feared by those who suppor

The Mainstreaming of the Extreme Right in France and Australia: A Populist Hegemony?