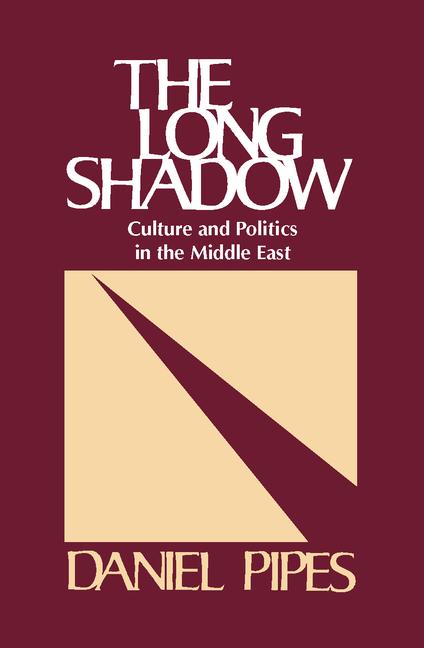 The Long Shadow: Culture and Politics in the Middle East

This is a book about politics by a historian. Though the subject matter closely resembles that of a political scientist, policy analyst, or journalist, the approach and treatment reflect the perspective available only to someone versed in the long shadow of the past. Daniel Pipes, a well-known writer on Middle East issues, offers the larger perspective so often missing. His study of the languages, religions, and culture, supplemented by years of personal experience in the region, give this book unusual depth.

The Long Shadow concentrates on 5 vivid and critical topics of the Middle East.

1. The Islam and Public Life. Pipes, author of two books on Islam in politics and a recognized authority, assesses Islam in Iran, Iraq, and the Soviet Union, as well as Islam's role in anti-Semitism.

2. The Persian Gulf. Here Pipes examines the origins of the Iraq-Iran war, the curse of oil wealth, and shares insights gained from an unusual visit to Kuwait.

3. The Arab-Israeli Conflict. In some of his most original work Pipes argues that the struggle between Arabs on the question of Palestine is actually more central than the struggle between the Arabs and Israel. He sees the PLO as little more than a tool of the Arab states, and perceives the deep division between Jews and Arabs in Israel today is likely to be permanent.

4. Iranian, Lebanese, and Libyan Terrorism have greatly affected the tenor of Middle East politics. Pipes shows how they differ and why the Iranians pose the greatest threat to the United States.

5. The United States in the Middle East. Pipes examines U.S. policy toward the area and American media coverage, arguing that both follow idiosyncratic rhythms, and explaining these peculiarities against the backdrop of larger American interests in the region.

While a number of Middle East specialists have written books or essays on the subjects addressed by Pipes, his book is distinguished both by its scope and its focus on the general reader as well as the specialist.

The Long Shadow: Culture and Politics in the Middle East