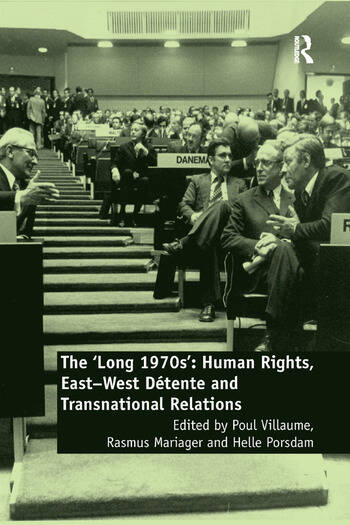 Today it is widely recognised that the 'long 1970s' was a decisive international transition period during which traditional, collective-oriented socio-economic interest and welfare policies were increasingly replaced by the more individually and neo-liberally oriented value policies of the post-industrial epoch. Seen from a distance of three decades, it is increasingly clear that these socio-economic and socio-cultural processes also found their expression at the level of national and international political power. The contributors to this volume explore these processes of political-cultural realignment and their social impetus in Western Europe and the Euro-Atlantic area in and around the 1970s in the context of three agenda-setting topics of international history of this period: human rights, including the impact of decolonisation; East-West détente in Europe; and transnational relations and discourses. Going beyond the so-called Americanisation processes of the immediate postwar period, this volume reclaims Europe's place – and particularly that of smaller European nations – in contemporary Western history, demonstrating Europe's contribution to transatlantic transformation processes in political culture, discourse, and power during this period.

Poul Villaume is Professor of Contemporary History at the University of Copenhagen, Denmark. He has authored, co-authored, and co-edited numerous books and articles on Danish, European, and transatlantic history in the 20th Century, in particular on Cold War related topics. He has been project leader of international collective research projects on the history of the Cold War, and is a member of the Royal Danish Historical Society. His most recent publication is The Long Détente. Changing Concepts of Security and Cooperation in Europe from the 1940s to the 1980s (co-ed. with Oliver Bange) (2015).

Rasmus Mariager is Associate Professor of Contemporary European and Danish History at the University of Copenhagen, Denmark. He has authored and edited books on Danish and European 20th Century history and among his publications are the volume Human Rights in Europe during the Cold War (co-ed. with K. Molin and K. Brathagen, 2014). Mariager is country editor of Scandinavian Journal of History and a member of the Royal Danish Historical Society.

Helle Porsdam is Professor of American Studies at the University of Copenhagen. Among her many publications are Legally Speaking: Contemporary American Culture and the Law (1999) and From Civil to Human Rights: Dialogues on Law and Humanities in the United States and Europe (2009). She was project leader of 'Cultivate' (2010–13), a HERA (Humanities in the European Research Area, ESF) project on copyright, creativity and cultural heritage institutions. She has received funding from the Danish Velux Foundation for a project on digital transformations and cultural heritage institutions (2015–19).

’This is a genuinely innovative international project that breaks much new ground, and gives fresh insights into the long 1970s. It looks at ideas about human rights as well as the practical, transnational politics surrounding human rights issues in European and trans-Atlantic relations.’ Anne Deighton, Wolfson College, University of Oxford, UK