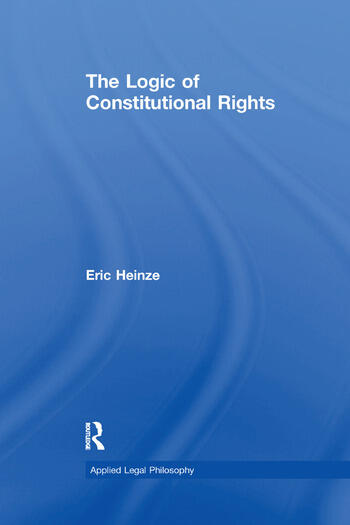 The Logic of Constitutional Rights

Individual rights raise endless conflicts and spawn intricate standards and policies. Increasing involvement by courts has added still greater complexity. It would seem that few meaningful principles can unite an area of law plagued by such uncertainty. In this book the author argues that a fixed structure underlies that complexity, determining the kinds of arguments that can be made about individual rights. Examples are drawn from the world's oldest and most intricate body of law on civil rights and liberties: the case law of the United States Supreme Court. Yet the model is designed to account for any legal system that recognizes civil rights and liberties. The author applies techniques of logical analysis (although no prior knowledge of logic is required) to identify a deeper discursive structure. He shows how simple concepts of harm and consent, which do not ordinarily appear to be relevant in all cases, provide unity within and across regimes of individual rights.

Dr Eric Heinze is Reader in Law at University of London, Queen Mary, where his areas of teaching and research include Jurisprudence and Legal Theory, International Human Rights and US Constitutional Law. His publications on the formal analysis of rights discourse include The Logic of Liberal Rights and The Logic of Equality. His publications on human rights also include Sexual Orientation: A Human Right. His current scholarship is examining critical currents in the history of legal theory, with a focus on Plato, Aristotle, Aquinas, Rousseau, Kant, Hegel, Marx and Heidegger.

'This is none other than a roadmap to the entire domain of constitutional rights...I predict it will be the 21st century equivalent of Hohfeld...we need more books like this showing the purely formal structure of law, so that we can all get clear about not only the law, but the important (and less formalizable) emotions and values that act as the motivational springs for people's use of the structure Eric Heinze so admirably describes.' Professor Louis E. Wolcher, University of Washington, USA 'The strength of this book, and its main contribution, lies in the careful distinctions Heinze draws in identifying the logical structure of the arguments that can be made in debates over constitutional rights...The book lays out these alternative arguments clearly...and provides numerous, well chosen examples...the book provides a useful, well-organized, and efficient analysis of the logic of rights claims.' The Law and Politics Book Review

The Logic of Constitutional Rights