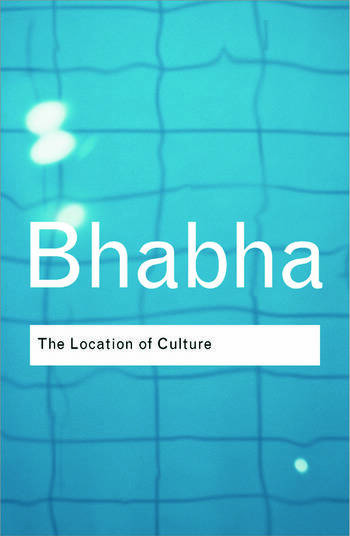 The Location of Culture

Rethinking questions of identity, social agency and national affiliation, Bhabha provides a working, if controversial, theory of cultural hybridity - one that goes far beyond previous attempts by others. In The Location of Culture, he uses concepts such as mimicry, interstice, hybridity, and liminality to argue that cultural production is always most productive where it is most ambivalent. Speaking in a voice that combines intellectual ease with the belief that theory itself can contribute to practical political change, Bhabha has become one of the leading post-colonial theorists of this era.

Acknowledgements, Introduction: Locations of culture, 1. The commitment to theory, 2. Interrogating identity: Frantz Fanon and the postcolonial prerogative, 3. The other question: Stereotype, discrimination and the discourse of colonialism, 4. Of mimicry and man: The ambivalence of colonial discourse, 5. Sly civility, 6. Signs taken for wonders: Questions of ambivalence and authority under a tree outside Delhi, May 1817, 7. Articulating the archaic: Cultural difference and colonial nonsense, 8. DissemiNation: Time, narrative and the margins of the modern nation, 9. The postcolonial and the postmodern: The question of agency, 10. By bread alone: Signs of violence in the mid-nineteenth century, 11. How newness enters the world: Postmodern space, postcolonial times and the trials of cultural translation, 12. Conclusion: 'Race', time and the revision of modernity, Notes, Index.

Homi K Bhabha (1949- ) Born into the Parsi community of Bombay, Bhabha is a leading voice in postcolonial studies. He is currently Professor of English and Afro-American Studies, Harvard University

The Location of Culture