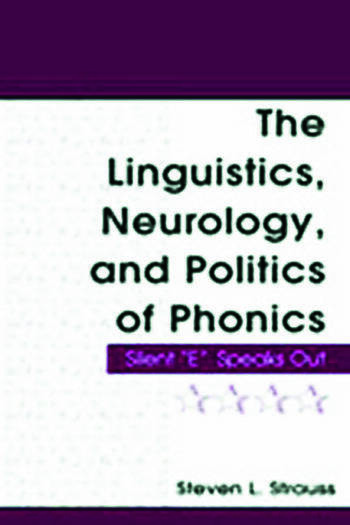 The Linguistics, Neurology, and Politics of Phonics: Silent "E" Speaks Out

This book explores the driving forces behind the current government-sponsored resurrection of phonics, and the arguments used to justify it. It examines the roles played by three key actors--corporate America, politicians, and state-supported reading researchers--in the formulation of what Strauss terms the neophonics political program. Essential for researchers, students, and teachers of literacy and reading, and for anyone seeking to understand what is happening in U.S. public schools today, The Linguistics, Neurology, and Politics of Phonics: Silent "E" Speaks Out:
*analyzes the political nature of the alleged literacy crisis in the United States, through an investigation of the political and corporate motives behind the renewed focus on phonics, and media complicity in promoting the neophonics political program as the solution to the so-called crisis;
*examines the scientific claims of neophonics, including methodology, linguistics, and neuroscience, and exposes the flaws in its reasoning and the weakness of its arguments;
*addresses the scientific, empirical investigation of letter-sound relationships in English (of phonics itself), and demonstrates the complexity of the system and its associated benefits and limitations in the theory and practice of reading;
*proposes actions to help make a return to politically undistorted science and to democratic classrooms a reality; and
*introduces, in a postscript, a formal analysis of the letter-sound system, using empirically based rules to convert one finite set of elements, the alphabet, into another, the phonemes of the spoken language.

Offering up-to-date information and an original critique, this book makes two important contributions. One is the policy analysis linking government agencies, policymakers, and corporate interests. The second is the neurological and linguistic treatment of why traditional phonics programs are not the solution and why the rhetoric developed to support their resurgence is so far off the mark.

Contents: R.L. Allington, Foreword. Preface. Part I: The Problem: An Alleged Literacy Crisis. The Literacy Crisis According to Corporate America. Corporate America's Education Reform. Political Support of the Corporate Agenda. Media Complicity in Promoting Neophonics. Part II: The Neophonics Solution: A Case of Contemporary Pseudoscience. The Variety of Scientific Methodologies. Problems With the Alphabetic Principle. Functional Neuroimaging and the Image of Phonics. Part III: Reclaiming the Science of Phonics. Three Definitions of Phonics. The Principle for Competing Phonics Rules. Theoretical Implications of r- Controlled Vowels. The Phonics of Silent e. The Naturalness of Exceptions to Phonics Rules. Applications of Scientific Phonics. Part IV: Defending Science and Democracy Against Neophonics. The Neophonics Counterrevolution in Science. Academic Imperialism Versus Academic Freedom. Postscript: A Formal Approach to Phonics.

"The book synthesizes information from diverse disciplines, including linguistics, neurology, education, economics, and politics. It is a must-read for literacy scholars, education and policy makers, and school administrators. It is also a valuable resource for classroom teachers and concerned parents who want to do something about the increasingly federalized school curriculum."
—Language Arts

"This book provides a missing facet in continuing efforts to expose the fallacies of the scientific research paradigm, by synthesizing the various coalitions behind...the current government mandates. I don't know of another work that pulls it all together and examines the motives behind the push for phonics. Strauss has extensive knowledge of various fields such as corporate and political agendas and quite brilliantly establishes the motives behind their intersection."
—Elaine M. Garan
California State University, Fresno

"The Linguistics, Neurology, and Politics of Phonics: Silent 'E' Speaks Out works to reappropriate science and scholarship from a government that has its head in the sand about reading research and pedagogy. It is a wonderful contribution to the field. Theoretical and scholarly, it has a home on the shelves of linguists as well as reading researchers and graduate students in reading and literacy."
—Richard J. Meyer
University of New Mexico

The Linguistics, Neurology, and Politics of Phonics: Silent "E" Speaks Out