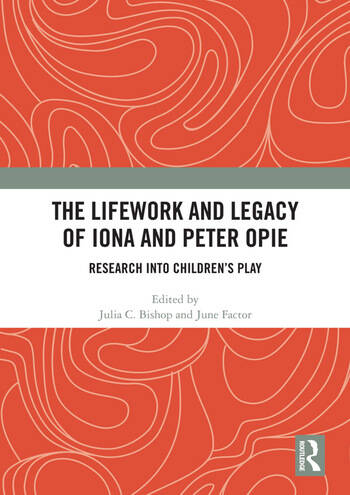 The Lifework and Legacy of Iona and Peter Opie: Research into Children’s Play

Iona and Peter Opie were twentieth-century pioneers. Their research and writing focused on the folklore of British children – their games, rhymes, riddles, secret languages and every variety of the traditions and inventions of the children’s collective physical and verbal play. Such closely observed, respectful, good-humoured and historically attuned writing about the traditions of childhood was a revelation to English-language readers around the world. Their numerous books were a rare phenomenon: they attracted a popular readership far beyond the professional and academic communities. For those who work with children, their collaborative research was a powerful influence in confirming the immense capacities of the young for cooperation, conservation, invention and imagination. Their books challenged – then and now – the bleak and limited view of children which focuses on their smallness, ignorance and powerlessness.

The writers in this volume pay their tribute to the Opies by exploring a wonderfully varied topography of children's play, from different countries and different perspectives. Their research is vivid and challenging; that is, as it should be, in the tradition of the Opies.

This book was originally published as a special issue of the International Journal of Play.

1. What is the state of play? Seth Giddings

2. A lifetime in the playground (inaugural address to ‘The State of Play’ conference, University of Sheffield, 1998) Iona Opie

3. The making of folklore books: chiefly the experiences of the Revd. John Brand and the Opies Iona Opie

4. The lives and legacies of Iona and Peter Opie Julia C. Bishop

5. Colleagues in the Antipodes: conversations with Iona and Peter Opie June Factor

6. The lore and law of the playground Amanda Bateman and Carly W. Butler

7. From local to global: the evolution of musical play in secondary schools Athena Lill

8. From the wild frontier of Davy Crockett to the wintery fiords of Frozen: changes in media consumption, play and literacy from the 1950s to the 2010s Jackie Marsh

Memories of and Reflections about the Opies and their Work

13. Iona and me Mavis Curtis

14. What the Opies have meant to me: opening teachers’ eyes to the literacies of the playground Elizabeth Grugeon

16. Stumbling into folklore more than 50 years ago J.D.A. Widdowson

Julia C. Bishop is a folklorist specialising in children’s play. She has published on multimodal transmission and performance in play and the history of children’s play. She is currently researching the work of Iona and Peter Opie and the online publication of their archival collection.

June Factor is a writer, folklorist and social historian. She was a founding editor of the International Journal of Play and has published widely, including Captain Cook Chased a Chook: Children’s Folklore in Australia (1988), Kidspeak: A Dictionary of Australian Children’s Words (with Siobhan Hannan, 2000) and the Far Out! series of children's verbal lore.

The Lifework and Legacy of Iona and Peter Opie: Research into Children’s Play